The Jews from Arad celebrated Rosh HaShanah La’Ilanot, on the last day of January, that is, the New Year of the Tree. Judaism, a religion and a culture oriented towards making a better world, also has an ecological specificity. Thus, every year, during this period, Jews from all corners of the world rejoice at Tu B’Shvat, the new year of trees. 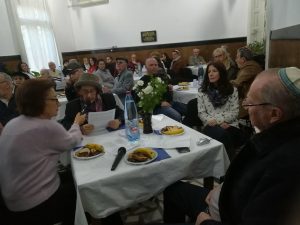 In our community, the festivities began with the acclaimed professor Noemi Reckerth, about what Tu B’Shvat means, where it comes from and what is being done on this day. Together with the President, we want to thank her for the effort and dedication with which, for decades, she brought us the Jewish teaching and information.

Although there is usually a Tu B’Shvat Seder, a ritual in which specific foods, beverages and prayers are ordered, the community of Arad has now decided that only fruit and cakes will be served, with plenty of music about nature.

No, it is not about a communist state, but a true democracy, a society in which every individual thinks it is his honor and duty to build a better world. That is why any religious celebration also receives a strong social charge.

“If the forests in Romania are cut off, here is how, in Israel where is desert, trees are planted and the plantings are massive,” said Ionel Schlesinger, president of the Jewish Community of Arad, inviting the participants to watch records from a planting action last year. From babies taken outdoors for fresh air, small children, young people, adults and the elderly, all contribute to; if you wish; the afforestation of Israel, either through actual planting or by buying seedlings or spreading information about the best way to plant. Donations for such plantings are received annually from all over the world, Jews wanting to contribute or connect in this way to Eretz Israel. 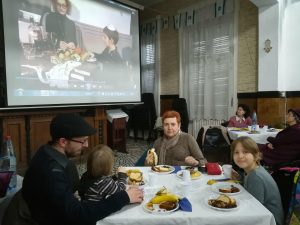 Another film brought to the audience was a presentation of a Tu B’Shvat Seder, made by young people from the Jewish community of Romania, Yael Gross and Emi Pustai.

Considering the tensions around the world over the Israeli capital, the president of the Arad community also showed the participants a video created by an American television about Islamic extremism. The reality faced by citizens of Israel, regardless of religion or ethnicity, was presented this time through Lela Gilbert’s perspective, the author of the book “Saturday People, Sunday People”. The book was created after the author discovered graffiti written by Islamist extremists on the buildings. Their message was “Saturday we kill the Jews, and Sunday the Christians.” Moreover, Lela Gilbert points out that Christians are being persecuted in the countries that evicted Jews between 1948 and 1970. 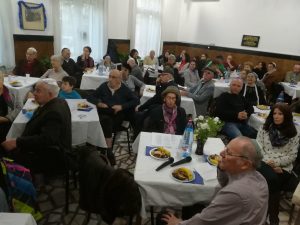 The whole event was sprinkled with Jewish music specific for this celebration, two of the songs being translated into Romanian by our colleague Danna Kalman. The icing on the cake was, as usual, singing the Hatikva, the hymn of Israel.

The feast ended with the socialization of the participants, who enjoyed seeing and speaking with each other again.

In honor of the Arad Jews