In honor of the Arad Jews

On National Minority Day students from several high schools have discovered the traditions and values of Judaism. 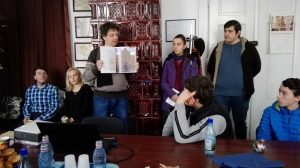 On December 18, the „Nicolae Cajal” Jewish Studies Center, the “Vasile Goldiş” Western University, the Arad Museum and the Arad Jewish Community organized a cultural event on the occasion of the National Minorities Day, adopted by the Chamber of Deputies for this date. 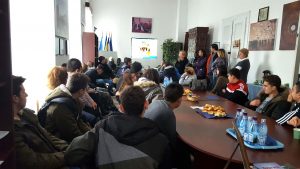 Although the event was scheduled at 12 o’clock, the Hall of the Jewish Studies Center became overcrowded more than a quarter of an hour before. The event was opened in the presence of 9th, 10th and 11th grade students from the Iuliu Moldovan Technological High School, accompanied by professors Oana Olariu, Ramona Sebişan and Cosmin Julan with a presentation of the worship  objects  held by prof. Marius Grec, head of the center.

The students learned from the director of the Jewish Studies Center, about the Jewish holidays, especially Hanukah, the feast of light (December 12-20, 2017), how to read from the Torah without touching it with the hand, what is a menorah, a yam, a kippah and what’s their use. What is the significance of the Jewish culture, how many values it gave both to the city on the Mureș, to our country and to the whole world, starting with historical personalities, passing through the most revolutionary Israeli inventions and reaching the long line of Nobel Prize-winners of Jewish origin. 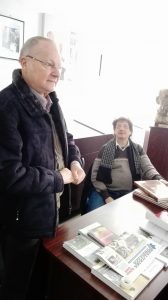 Ionel Schlesinger, president of the Jewish Community of Arad, spoke about the different degrees of anti-Semitism and xenophobia, manifested especially in the virtual space of social networks and about  life of the  Jewish community in Arad.

A short video presentation of Romanian synagogues followed, where prof. Marius Grec also talked about the book, The Synagogue in Romania, published by the Hasefer publishing house. 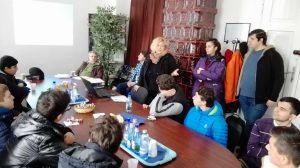 After the impressive images of the synagogues, Dr. Adelina Stoenescu, the most famous and appreciated curator  in our city’s schools took the floor.

In her special style of a talented storyteller, Adelina Stoenescu showed the students the documentary exhibition opened in September 2017, on the occasion of the 300 years of Jewish life in Arad, which fascinated the high school students.

Mrs. Stoenescu wanted to mention and thank both her colleagues who have done extraordinary work to gather this collection and the Jewish Community of Arad, whose members donated personal things, objects of special material, sentimental and ethnographic value to the museum. She repeatedly emphasized the generosity of the Jews in this respect, as well as the significance of the objects for the museum in Arad. 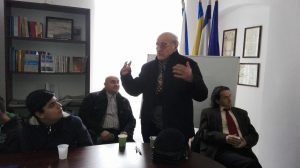 The high school students and their tutors, students, university professors, researchers, journalists and curators were given an opportunity to listen, at the request of Mr. Grec and Mr. Schlesinger, to an ad hoc account offered by the distinguished historian Horia Truță, about the Water Tower Galleries . 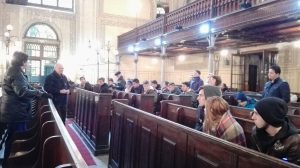 The event ended with a visit to the Neolog Synagogue, where the presentation of the building and a series of dialogues between the guests and the lecturers took place.