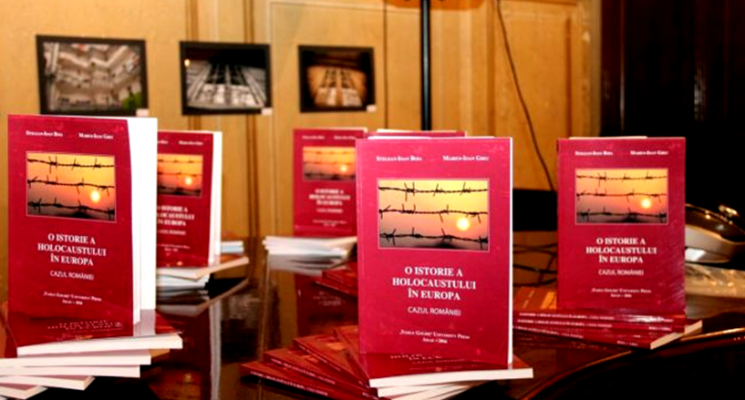 Article posted in “Europeanul of Arad”: 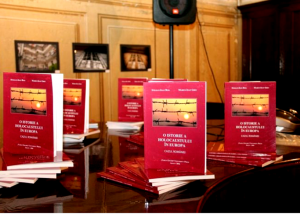 Thursday, 2016, October the 13th, 17.00 at the Neologue Synagogue of Arad, in the presence of a large audience (about 300 people), was released the volume: A HISTORY OF THE EUROPEAN HOLOCAUST. CASE OF ROMANIA. The volume was made by two of the researchers of the Center for Jewish Studies “Academician Nicolae Cajal” of the Western University “Vasile Goldis” from Arad, Stelean-Ioan Boia, Lecturer of History of the Holocaust in Europe, optional discipline at specialization History and Marius-Ioan Grec, Director of the Center for Jewish studies. The writing was published in a Project – submitted for funding by Marius Grec – financed by the Municipal Cultural Centre of Arad and co-financed by the Western University “Vasile Goldis”.

The events began in the morning from 10.00 at the Old Neologue Cemetery, where in the presence of members of the Jewish Community, religious representatives of Arad, lead by Reverend Timothy, the Archbishop of Arad, local authorities, a group of students and Mrs. Andreea Mocanu – representative of the Ministry of Foreign Affairs and International Holocaust Remembrance Alliance (IHRA), an inter-governmental alliance coordinated by Romania this year, began the events commemorating the Holocaust Day in Romania. 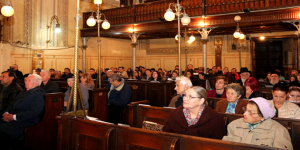 Western University “Vasile Goldis” was represented by the Director of the Center for Jewish Studies “Academician Nicolae Cajal”, Prof. Dr. Marius-Ioan Grec who – in the idea that the Holocaust should be addressed only by historians – was invited to address the participants to introduce in a few words the volume made by the Centre. Professor Marius Grec recalled the concert that will follow the launch, supported by organist Martin Meier from Jena. Also, given that the two points of the program were to be held in the Neologue Synagogue, place of worship built at the initiative and under the direction of Rabbi Aron Chorin more than 180 years ago, it was announced the next widespread manifestation organized under the aegis of The Center for Jewish Studies in collaboration with the Jewish Community from Arad: Launch of the biographical volume “Aaron Chorin” by Leopold Löw, a bilingual edition, English-Romanian.

Launch of the book dedicated to the European Holocaust is a first in the Romanian editorial space, being a university course, having certain scientific values, addressed to history teachers, students, high school pupils and to all those who want to know the story of this tragic phenomenon in human history, the HOLOCAUST.

Given that this year Romania holds the presidency of IHRA, the message of the Alliance’s President, Ambassador Mihnea Constantinescu, was submitted to the audience by Andreea Mocanu, leading member of the Alliance. At the Neologue Synagogue, where events were opened by Eng. Ionel Schlesinger – President of the Jewish Community, it was noted the participation of UVVG’s President, Prof. Dr. Aurel Ardelean, Reverend Timothy Seviciu Archbishop of Arad, various religious representatives of Arad and local institutions, teachers, students, pupils, members of the Jewish Community from Arad, Timisoara, Lugoj and a large audience.

Prof. Dr. Marius-Ioan Grec, said: “We’ve assisted to a special event that recalls a tragic moment of human history, the HOLOCAUST. The event was attended by Mrs. Andreea Mocanu – representative of the Ministry of Foreign Affairs, who wore the word of International Holocaust Remembrance Alliance’s President, an international association that is made up of 31 states. This year, the president of the Alliance is from Romania, namely Ambassador Mihnea Constantinescu. Since March of this year to March of next year, the Alliance coordinated by Romania has organized and will organize a series of events throughout Europe. The volume published under the aegis of the Western University “Vasile Goldis” of Arad, is bilingual in English and Romanian. It will certainly have a very good reception both nationally and internationally”.

Prof. Dr. Aurel Ardelean, President of Western University “Vasile Goldis” of Arad, said: “The book “A HISTORY OF EUROPEAN HOLOCAUST. CASE OF ROMANIA” is well documented and demonstrate that the Holocaust existed in Romania in various forms. Our colleagues launched the volume in the presence of a large audience interested in this issue. Western University “Vasile Goldis” was well represented in this action and the Center for Jewish Studies, which has developed several studies on Jews, works very well with the Jewish Community of Arad, which entitles us to say that these results can be evidenced in other appearances that we want to publish on this subject”.