A bridge between two worlds

In the collective thinking of the Jewish people there is a repeated warning over and over again at almost all cultural, political or religious manifestations. “Who kills a man, kills mankind.” Each of us has a vast universe made up of cultural, ideological and religious memes that have found good ground in our minds and souls, a kaleidoscope of our ancestors with some colors and forms more prominent than others. We carry worlds with us and every time we interact with other worlds, other cultures, religions, peoples, we enrich ourselves and the society that created us. But, over the course of history, some worlds have tried to swallow others, either were they political, nationalist or religious currents, the movements becoming too often violent, with victims on both sides with immeasurable suffering and wounds that may not heal anymore. Such a political-ideological current was Nazism, which brought the death of over 6 million people considered to be sub-people. The Nazi regime chose the Jews as its first victims, then the Roma, the disabled, LGBT people, those who hid such people and, being totalitarian, exterminated anyone who opposed it. Things have degenerated until they saw in the pale yellow hair and the blue eyes the characteristics of the “pure race”.

The International Council of Christians and Jews (ICCJ), an umbrella organization comprising 40 national organizations, was created as a reaction to the Shoah (Holocaust).

ICCJ members across the globe have been building and consolidating for five decades a bridge between the Jewish and Christian worlds, creating connections between individuals, communities and societies. Moreover, this know-how begins to be used for the Abrahamic dialogue between Jews, Christians and Muslims, ICCJ’s effort offering models for wider inter-religious relations.

In the house where the great Jewish philosopher Martin Buber lived, before being forced to leave because of Nazi persecution, the ICCJ headquarters is today.

The aims of the organization

All national organizations affiliated to the ICCJ are dedicated to common customs to promote understanding and co-operation between Christians and Jews; to combat all forms of intolerance, discrimination, racism and misappropriation of religion with a view to national and political domination; to have an honest dialogue in which each person remains loyal to his own beliefs and obligations, recognizing another person’s integrity and alterity, all based on respect for each other, on the protection of the identity and integrity of the other.

“This approach, which tends to bring together people from different religions  without pursuing to bring closer the religions, removes from the start the problems of attempts to bring religions closer, issues that have so far proved insurmountable. Where Muslim communities exist, the dialogue is Christian-Jewish-Muslim”, says Ionel Schlesinger, president of the Jewish Community of Arad.

The ICCJ holds annual conferences on topical issues of the Judeo-Christian and abrahamic dialogue. At such a meeting in the Austrian city of Eisenstadt, Ionel Schlesinger, President of the Jewish Community of Arad (JCA), gave a lecture on the very good relations between people of different ethnicities and religions in our county, thus stimulating the participants’ curiosity and the desire of the organizers to prepare a conference here.

The first in Romania

Ionel Schlesinger`s work to organize the ICCJ conference in our city made Arad the first city in the country on the map of the international Judeo-Christian conferences. Between 26th and 27th of May 2009, the city on Muresh hosted a meeting titled “Towards a Spiritual Unity of the World – Jews, Christians and Muslims at the Beginning of the Third Millennium”, which gathered 40 participants from Romania, Israel, France, Austria, Germany, Czech Republic, Slovakia, Poland, USA and Hungary in Arad. 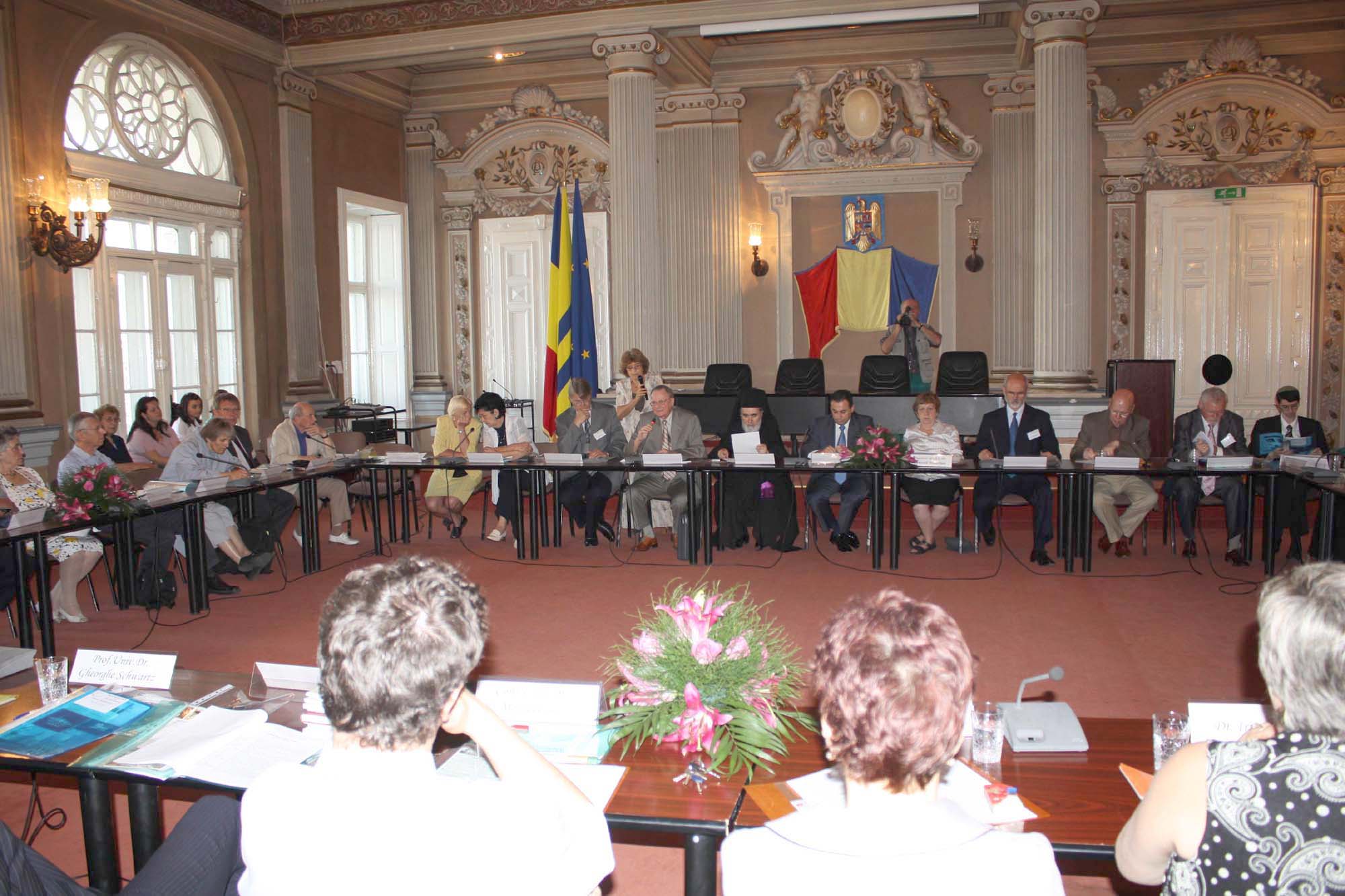 “A wish born and expressed two years ago at an ICCJ conference in Eisenstadt, Austria, is fulfilled: Arad, known for the good relations between all religious cults and ethnic groups that define it as a multi-religious, multiethnic and multicultural city, hosts an ICCJ conference and one of the objectives of this conference is to establish in Romania a national affiliated structure at the ICCJ, “said Ionel Schlesinger, president of the Arad Jewish Community at the opening of the event. 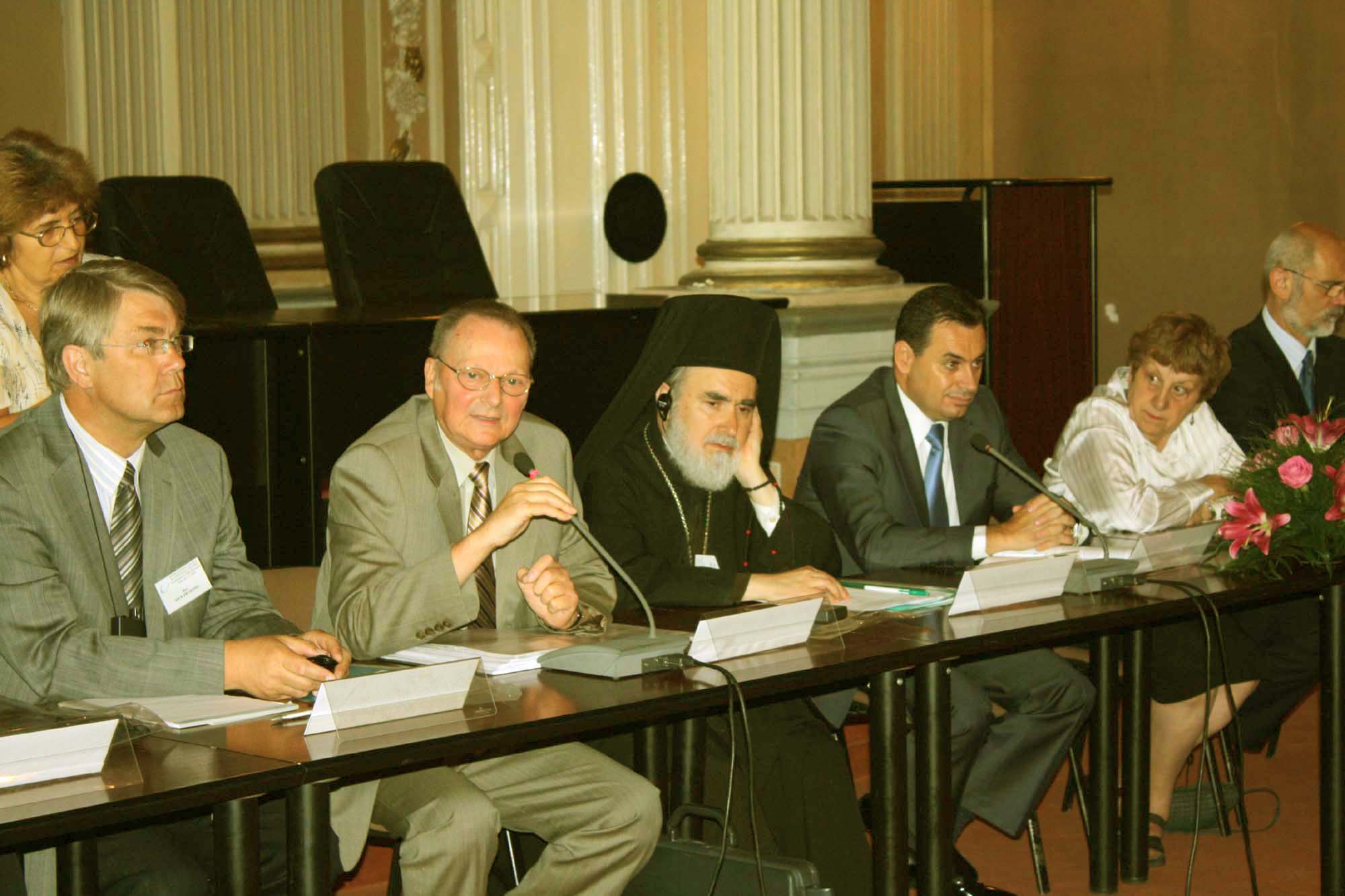 The president of the JCA has drawn attention to the fact that “we live in a world in crisis, not only financial, but also moral, with a perverted scale of values, a world where blame for the failure of regimes and leaders to meet the needs of their people is put on a foreign element, a world in which stereotypes take the place of real knowledge, where religious fundamentalism is taken to the extreme, denies the right of other faith to exist.”

Personalities from all over the world

Leading personalities from Romania and abroad attented the conference organized by the Jewish Community of Arad, such as academician Răzvan Theodorescu who presented the speech “Romania – a religious synthesis”, prof. Mariana Stoica, former Ambassador of Romania to Israel between 2000 and 2007, who spoke about the “Necessity of dialogue with the Islamic world,” or Prof. Univ. Dr. Deborah Weissman, president of the International Council of Christians and Jews, whose praise and congratulations were directed both to the organizers and participants, while emphasizing the historical nature of the event and the fact that there could not be a better place for it because ” Arad was always considered an example of cooperation and tolerance.” 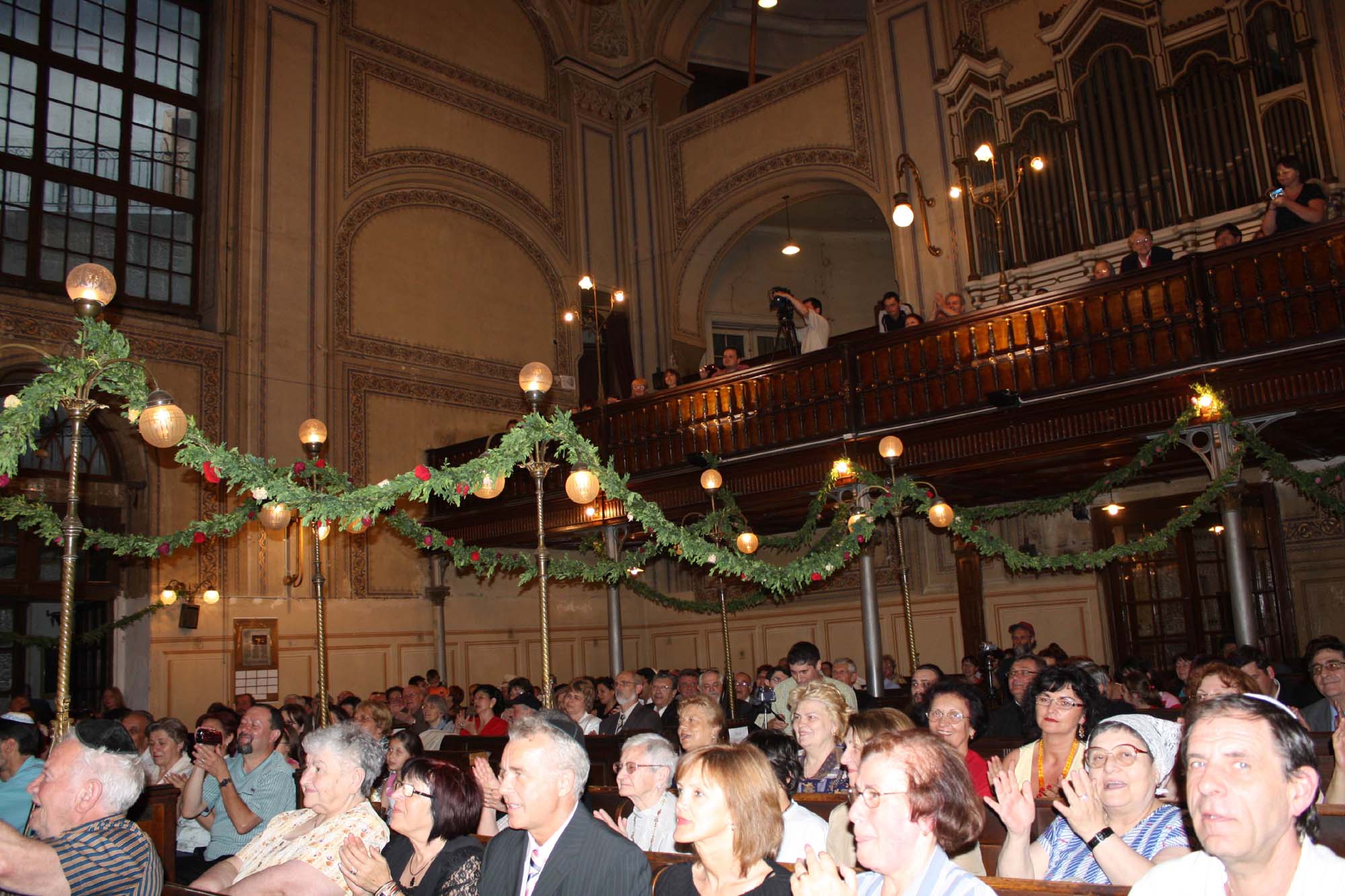 Among the participating personalities, we would like to mention Schmuel Barzilai, the leading cantor of the Jewish community in Vienna and a good friend of the Arad community; Prof. Radu Homescu former Ambassador of Romania in  the State of Israel between 1991-1995, Israel Sabag, Director of Romania for JDC; Ştefania Salisova, President of the Association of Christians and Jews of Slovakia, John Louis McGregor, Director of INSERM Unit, Lyon, France; Pastor Dick Pruiksma, ICCJ Secretary-General, Dr. Markus Himmelbauer, Director of the Co-ordination Committee for Christian-Jewish Cooperation in Austria, Dr Irina Cajal Marin, Diplomat at MAE; Emilia Lipkovits, Member of the Board of the Jewish Community of Cologne, Germany; Hildegonda Rijksenova, of the Center for Ecumenical Meetings and Dialogue in Olomouc, Czech Republic, Liviu Beris, President of the Jewish Association of Romania Victims of the Holocaust; High Priest Dr. Timotei Seviciu, Archbishop of Arad; Sorin Rosen, prime rabbi of Romania; Lizica Mihuţ, Rector of “Aurel Vlaicu” University, Aurel Ardelean, Rector of “Vasile Goldiş” University; university professors such as Marius Grec, Adriana Vizental and officials from Arad. 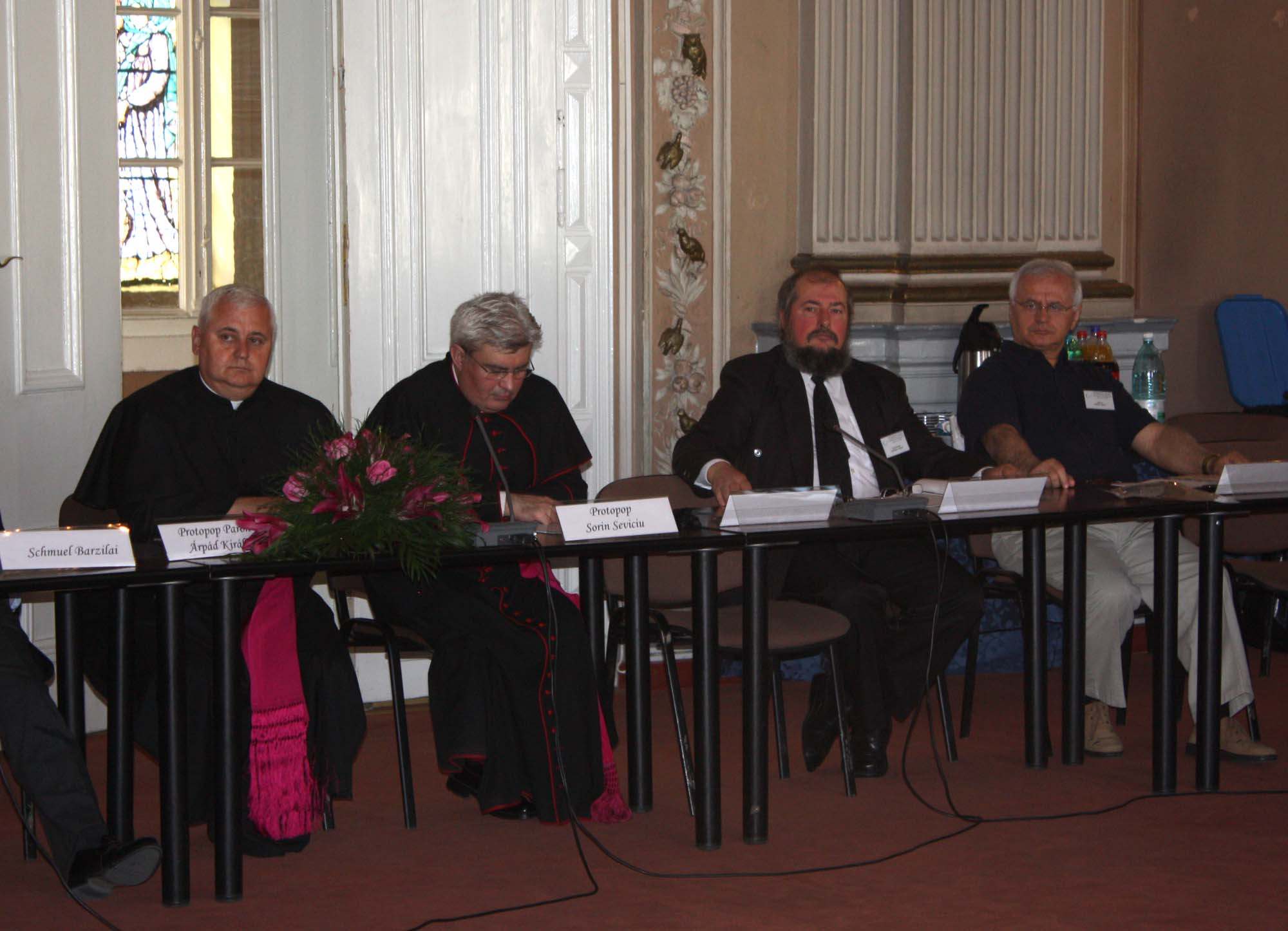 After several lectures and briefings, the participants took a well-deserved rest break for an hour, then went on a tour of the most reputable churches in our city. They visited the Roman Catholic Church, the Evangelical Church, the Orthodox Cathedral, the Reformed Church and the Gai Monastery. In the evening an extraordinary concert took place in Arad´s neolog synagogue where, besides those present at the international conference, there were also members of the Arad Jewish community as well as music lovers.

The wonderful concert was held by Schmuel Barzilai, the leading cantor of the Jewish community in Vienna, who made  all the hearts beat together in unity, regardless of religion or ethnicity.

The second day of the ICCJ conference began very vigorously with a SWOT analysis in which a radiography of the relationships between religions took place and the strengths, weaknesses, opportunities and threats were discussed. Among the weaknesses the lack of a national organization to act for the rapprochement of people of different religions and to join the ICCJ was mentioned.

After the coffee break, the local and national possibilities for setting up an ICCJ member organization in Romania were analyzed. At the same time, the ways in which such a desideratum can be achieved have been examined and an agenda has been established in this respect.

At the end of the conference, which took place at a reception in the Jewish Community, Ionel Schlesinger, the JCA president attracted the praise of Markus Himmelbauer, the general director of the Judeo-Christian Coordination Committee in Austria as well as of the other participating personalities for the excellent organization.

Among the themes introduced by Ionel Schlesinger during the conference is “Dabru Emet”.

“Speak The Truth” in Hebrew “Dabru Emet” is a document signed by more than 220 rabbis and intellectuals from all branches of Judaism on the relationship between Christianity and Judaism. Dabru Emet was published on September 10, 2000 in the New York Times and is used as a teaching material in Jewish educational programs in the United States. Although the document clearly states that there are differences of theological concepts between the two religions, it finds common ground from the perspective of Judaism.

The document was extremely well received in Christian circles.

The European Lutheran Commission for the Church and the Jewish People, an umbrella organization representing 25 Lutheran entities in Europe, issued in 2003 a response to Dabru Emet in which they said, among others, that the Lutherans should re-examine themes in their theology because in the past, these have brought enmity towards Jews.

In the two days of May 2009, how long the ICCJ conference lasted here in Arad, people acted in the idea of what the Jews define as Tikkun Olam, the repair of the world.

The work in our city has been based on the efforts of the International Council of Christians and Jews and the rabbis and intellectuals who drafted and signed “Dabru Emet”, as well as on many other efforts worthy of the greatest esteem. Such approaches change our minds, of all of us, regardless of religion, ethnicity, or other sources of difference between us, creating attitudes of respect and understanding by repairing the world for all the inhabitants of the Earth.

A flame burning for over two thousand years!