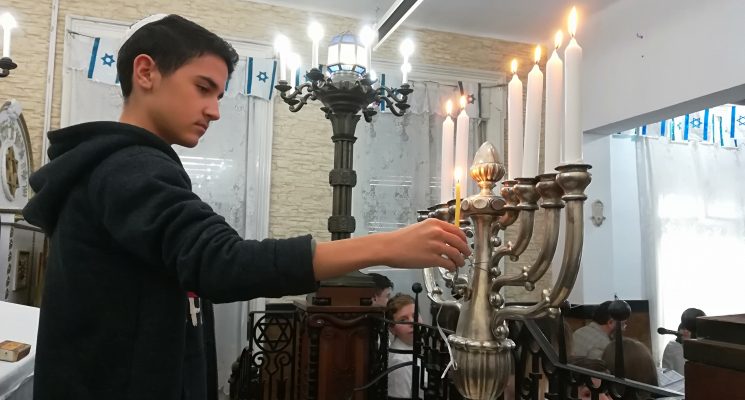 A flame burning for over two thousand years!

On the evening of  December, 7th, 2018 the Jews of Arad rejoiced together on Hannukah. Also called the feast of lights, Hag Haurim, in Hebrew, it celebrates the victory of the Maccabees on the Hellenes in Israel, and the miracle by which the synagogue oil lasted for eight days instead of one. In each of the eight evenings of Hannukah, Jews turn on so many lights on the Hanukkiah (eight-arm candle holder) how many Hannukah days count in the calendar. This time it was Robert Mor-Bartl’s turn to light six candles for the sixth day. He was accompanied by the blessings solemnly sung by the community friend, opera interpreter Ioan Moţiu. 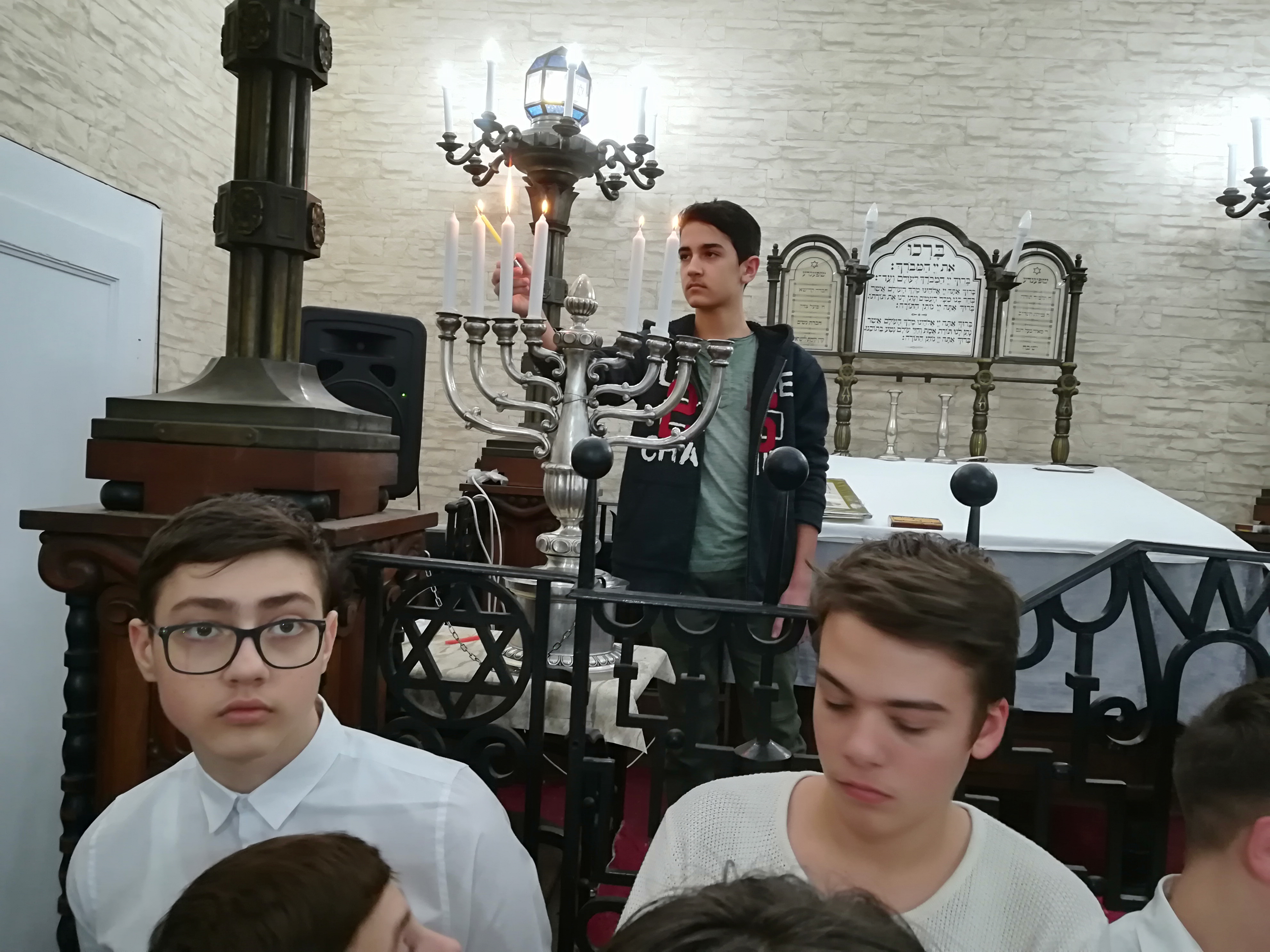 The president of the Jewish Community of Arad (JCA), Mr. Ionel Schlesinger addressed a few words about the feast as well as about the very beautiful relations our community has with the other cults in Arad present at this event, such as  His Eminence Timotei Seviciu, Archbishop of Arad; pastor Aurelia Gyurkucza, from the Evangelical-Lutheran Parish and father  Sorin Seviciu, from the Greek-Catholic Parish Center. 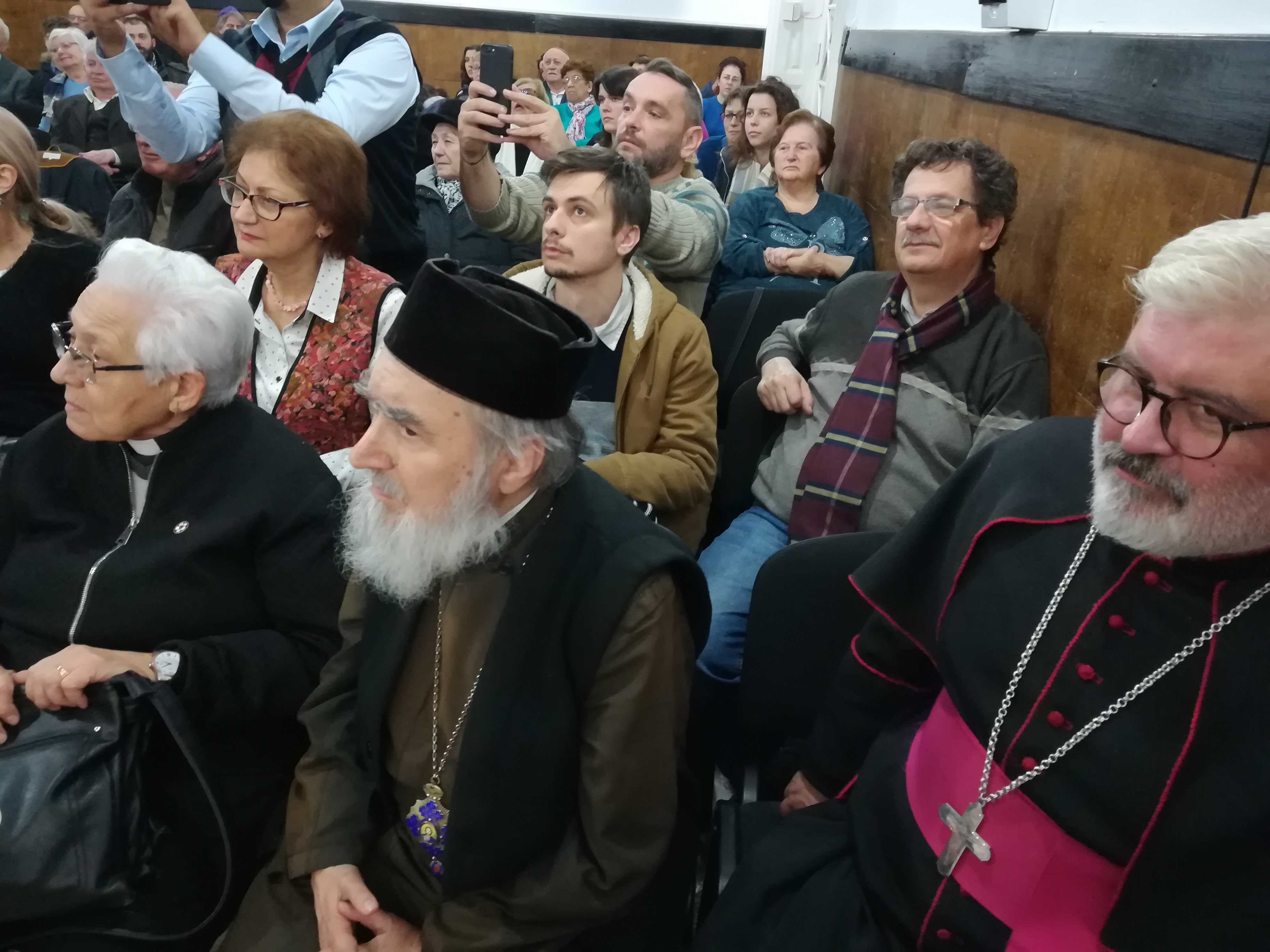 He also welcomed the representatives of the two universities in Arad, professor Mariana Nagy from “Aurel Vlaicu” University and professor Marius Grec from “Vasile Goldis” Western University.  Mr. Schlesinger emphasized the fact that a greater miracle than that in the Temple of the Maccabees is that the light of the Jews burns even more than the eight days mentioned above, it burns for over two thousand years.

Sevivon and a prayer

The 8th grade students from Sabin Drăgoi Art College followed, with a small concert of Hannukah specific songs  like Sevivon Sov Sov, Chanucha oh Chanuka or Yemei HaHanukah but also some other traditional songs from the Jewish folklore like Adon Olam, Heveinu shalom aleichem, Ose shalom, Sisu et Ierushalaim and a Hava Naghila at which the whole hall participate. Students have been dearly prepared and guided by  Monica Milichi-Tebuie, teacher, and accompanied by Alin Manolache, voice and teachers Laura Manolache and Andrei Ormanji at the piano. 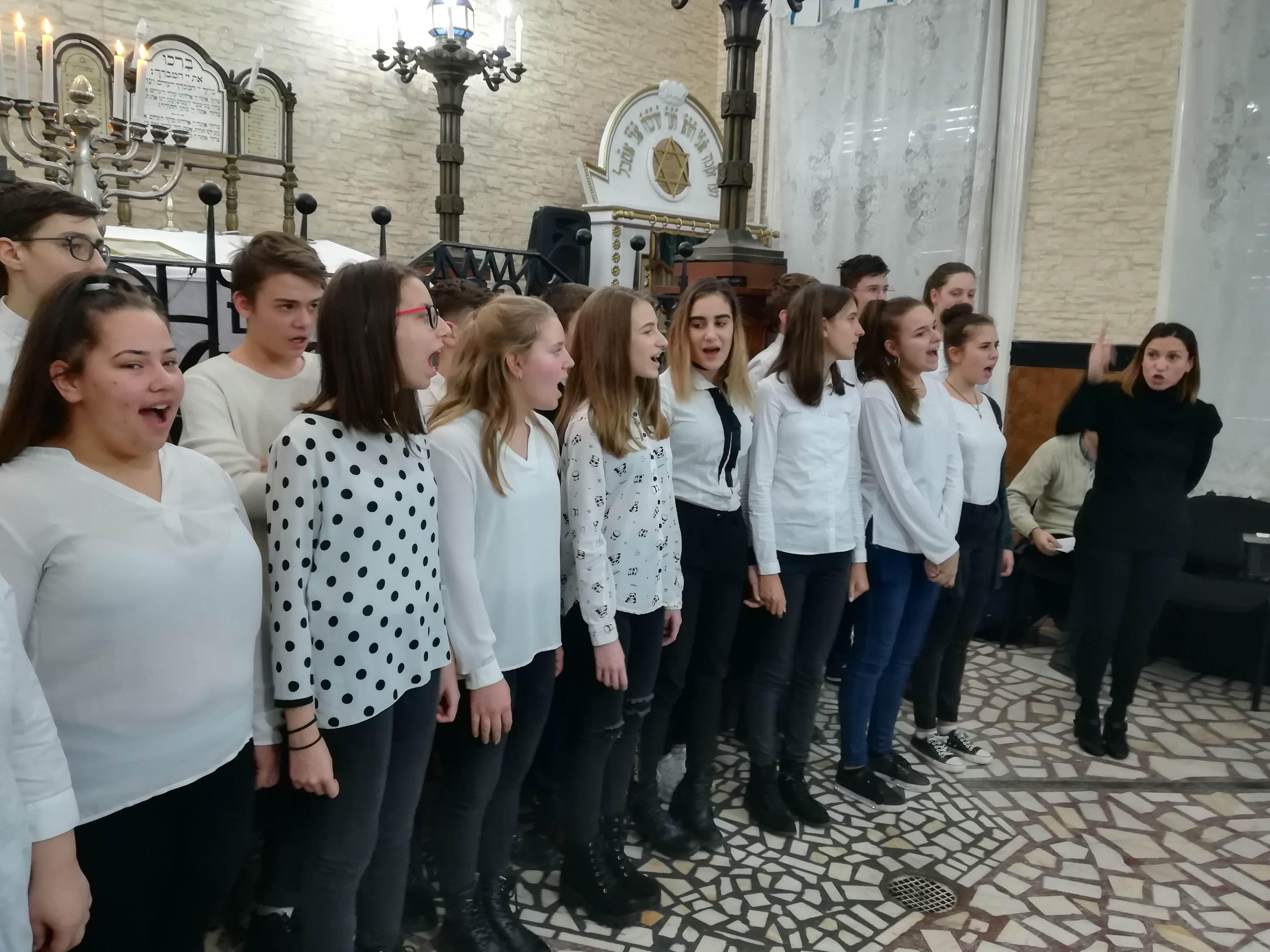 An exciting moment was when one of the high school students asked the president of the JCA, Ionel Schlesinger, that instead of the traditional Hannukah geld (money for Hannukah), to be  rewarded with a trip, as it happened last time. “Last time we sang and gave us a trip where we felt very good. Please do the same now” says the boy in tune with his colleagues’ giggles and the joy in the room. 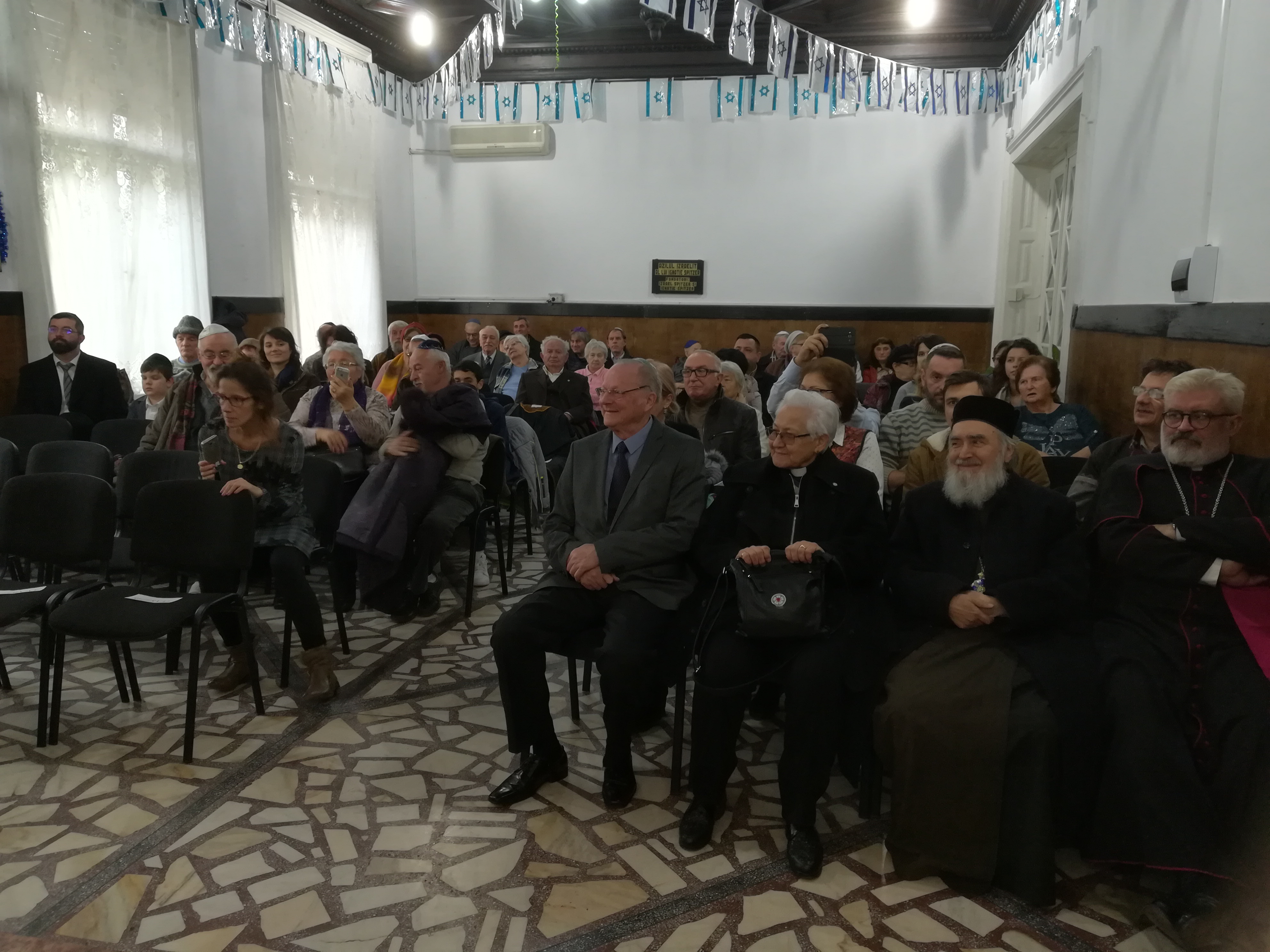 The peak of the event was the arrival of a group of physicians, highly qualified university professors: Herman Tzvika Berkovits, adviser, personal physician and friend of Prime Minister Benjamin Netanyahu, with his wife, Elisabeta Berkovits, Deputy Director of the Conservatory of Jerusalem; Ionel Bechiș, Romanian-Israeli consultant from Cluj; Florin Bobirca, doctor in general surgery at Cantacuzino Hospital in the capital, conf. univ. Cristiana Sârbu from the Agronomy University of Bucharest, academician Dan Mircea Enescu which established the plastic surgery for children in our country, accompanied by their friend, Teah Haimovitz, the creator of the Kabbalah jewels. Prof. Enescu was, these days, also distinguished with the title „Dr. Honoris Causa” of the “Vasile Goldis” Western University of Arad. 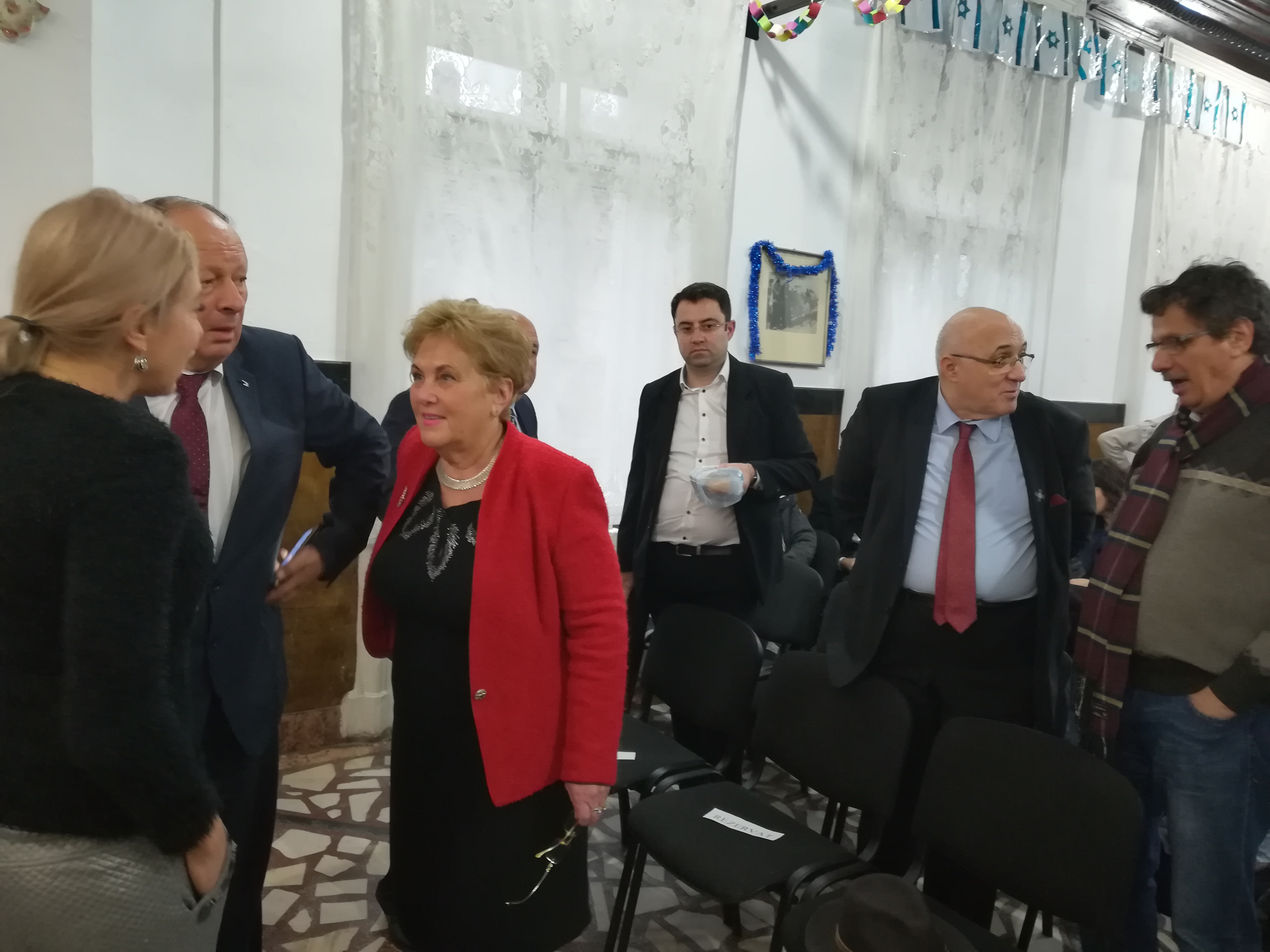 Dr.Herman Tzvika Berkovits thanked the Jewish Community of Arad for his special reception and pointed out that although he lives in Jerusalem he left from Romania, he considers himself Romanian and feels as a Romanian. He said that the Jews who left from here always miss Romania and often lobby for Romania or return to help our country. He told moments of life like the one he met his distinguished wife and the friendship that connects all of them to Thea Haimovitz. But what impressed Dr. Berkovits most was the atmosphere of friendship and communion between Christians and Jews of this evening. He thanked both the Archbishop and the representatives of the other denominations that they are with us. 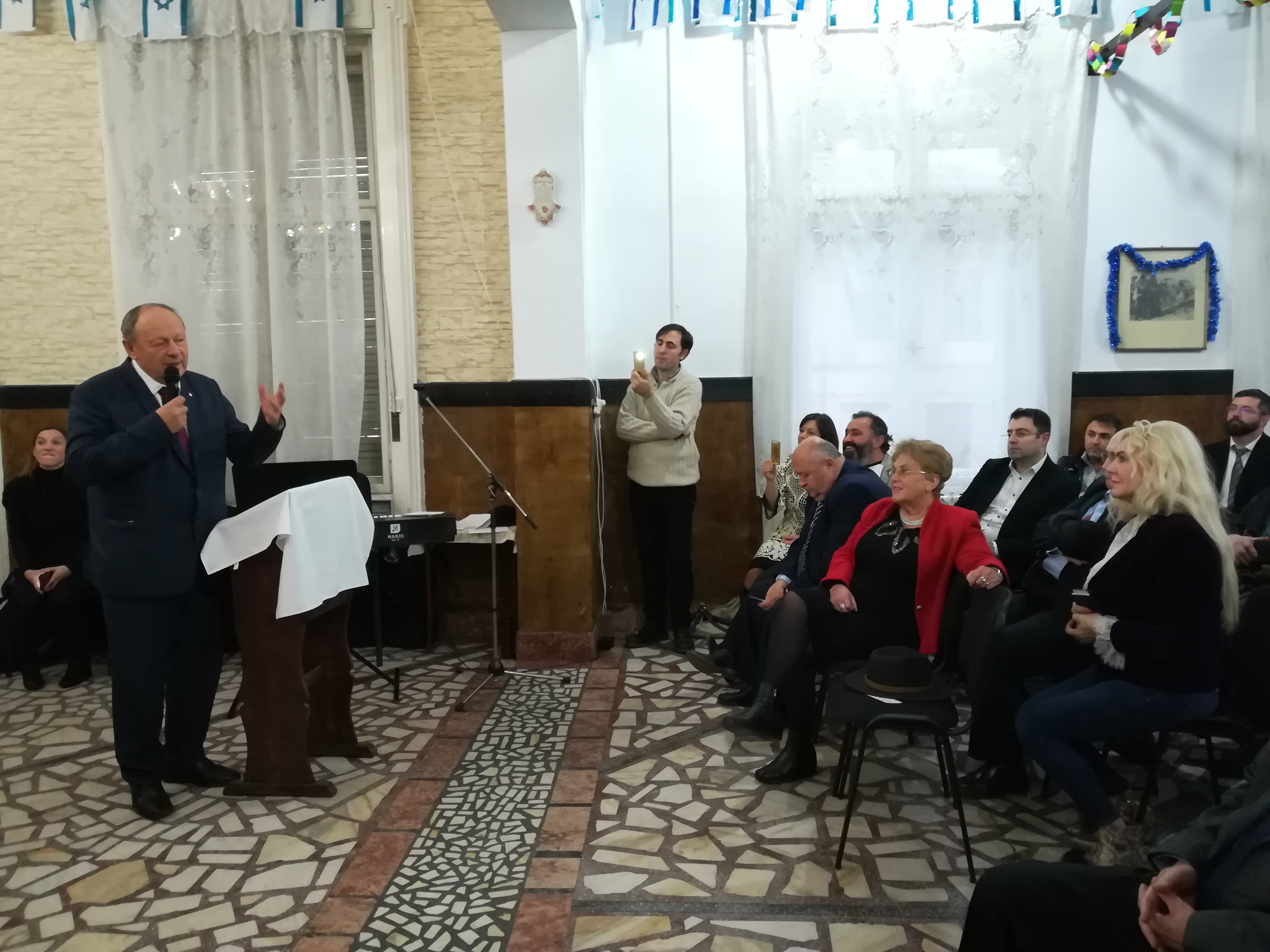 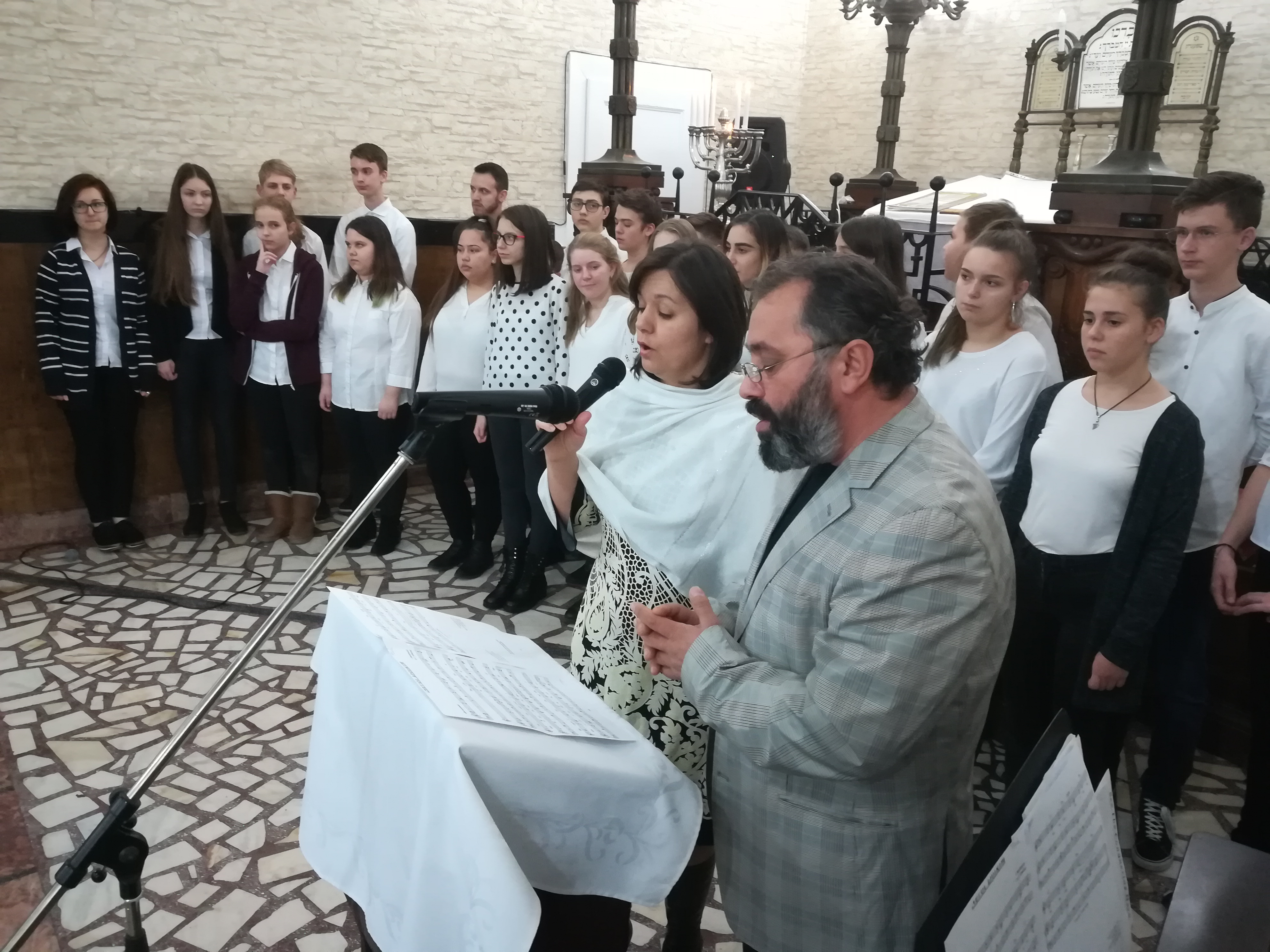 After the show ended, all those present have served the traditional Hannukah  food, doughnuts with jam and they stayed a little bit longer for a chat. Those who desired were invited to attend the Shabbat welcome service.

A bridge between two worlds

People from Arad, victims of the European Holocaust