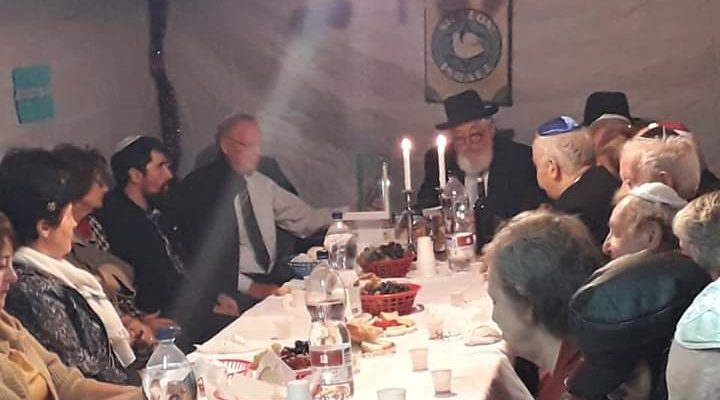 The feast of tabernacles between old and new

On Sunday, October 13, 2019, the Jews of Arad gathered to enjoy one of the three pilgrimage holidays in Judaism. The Sukkot or The feast of tabernacles lasts seven days in Israel and eight days in the Diaspora. From an agricultural point of view, it marks the end of the harvesting period in Israel, and historically it reminds us of the 40 years of pilgrimage in the desert, during which time the Jews lived in tents.

That is why, in Sukkot, a large tent is installed in the courtyard of the community’s Elderly Home, which is later decorated. This year the installation was also done by the staff of the Elderly Home, as every year, but the decoration part was more special because many of the decorations were brought by Elda Botezatul and her family directly from Israel. With the autumn holidays the activity of the Hebrew club coordinated by Margareta Szegő and Elda Botezatul also started, where the children from the community prepared beautiful colored paper garlands with which they decorated the tent. To get everything ready in time, Ionel Schlesinger, community president, Danna Kalman, community secretary, Ana Ioniță known as Aunt Ani, Raoul Vizental, together with his family, Elda Botezatu, together with her family and Margareta Szegő together with her family came faster to decorate and put the necessary things on the table. We thank them all in this way too. The tent looked wonderful being decorated with old and new elements. Of course, meanwhile, the Elderly Home’s courtyard became the playground for the children of the three families, who jumped, sang and ran.

People gathered at 6:30 pm, when the prayer of Mincha was held, after which they were invited to the table in Sukka (tent) where Ionel Schlesinger, the president of the community gave a welcoming speech and Abraham Erenfeld, the rabbi of the community presented the meaning holidays and customs related to it. Among the participants we mention Emeric Czege, Reformed priest and Gheorghe Schwartz, one of the most famous writers from Arad. The surprise of the evening was Ivan Bloch, the president of the Lugoj community, who spoke about the problems of the community he leads and the events he organizes. At the same time, he wanted to mention the new breath of the communities in Romania, namely Ery Pervulescu, one of the most active members of the small community of Caransebeș, now the director of the Jewish Programs in Romania.

The participants served sweet bread, two kinds of grapes, apples, honey and wine. The sensation of the evening was made by baby Edy, the youngest member of the Botezatu family, and children who just half an hour before had jumped through the yard. Although the cold of the evening began to feel more and more, the participants stayed at “a glass of speech” long after the official ending of the event.

”We remember and remind”

The Hebrew club moved  in the sukkah