After World War II and the difficulties encountered in the communist regime, many Romanians of Jewish origin fled the country to find a better living. But wherever they and their children were, they missed Romania. Some have not come back here, others come to visit relatives or friends. There are some who can not separate for a long time from the country where they were born and grew up, and then they make long and difficult trips to be both in Israel and in Romania.

On the other hand, although the Jewish population in our country, and even more so in Arad, has declined steadily over the last decades, JDC along with the Federation of Jewish Communities in Romania and implicitly the Arad Jewish Community, have made a constant effort to maintain Jewish cultural and religious life in our lands. The biggest issues related to the religious aspect for Jewish families in Romania were and are related to kosher food, the rabbinical presence, the presence of a mohel, the gathering of a miniam, etc. Thus, although there have been births among the Jews in Arad in the last decades, the brit milahs were missing.

Brit milah is the connection between the Jewish people and God, which traditionally takes place on the eighth day of life. Also called the Abrahamic covenant, it represents the seal of agreement between the Divinity and the chosen people.

The Brit Milah, best known by the Christian population in Romania and around the world, is that of Jesus Christ, which took place according to the Jewish tradition. It is celebrated on January 1st by the Romanian Orthodox Church and Catholic  Church and on 14 January by the Old Rite Orthodox Church under the name of “circumcision,” but Christians no longer practice it.

Between Israel and Romania

One of the most active families in the Arad community also divides its existence between the Middle East and Europe. In the Botezatu family, the first two children, Elinor and Emanuel, had performed their religious rites in Israel. However, the parents decided that the youngest child of the family should also  bring joy to the community in which they have their roots. That is, Edmond ben Călin (“ben” = son of) was circumcised in Arad after the family and the community had a real organizational periplus. The orchestration of Edmond’s birt milah had to take into account the finding of the mohel, the waiting for the rabbi (because he was at a conference), the arrival of the grandparents from Israel, and many more. That’s why the brit was delayed a few days.

So, on November 12, 2018, everything was prepared, and the small group of participants, made up of grandparents, uncles, aunts, cousins ​​and close friends, could be alongside the wonderful family.

Rabbi Zvika Kfir held a beautiful speech about what does the brit mean for the young family and child, after which he did the ritual along with the two mohels. The event was intertwined with the special vocal contribution of songs by cantor Emanuel Pusztai, the mother’s first cousin.

A river of blessings

The greatest honour on this occasion is to be sandek, that is the child’s companion. Usually it is reserved for a grandfather or another family member or a very close friend.

The role of sandwich is to keep the child throughout the ceremony, then speak with each participant and bless him in a personalized way.

Shlomo Pendus, the grandfather from the mother’s side, was given this ” mitzva ghedola”, that is, honour and great responsibility, which fit him like a  glove. He stood patiently on the small bimah bank asking each one  something about his personal life and what he wanted. To be healthy, happiness, peace, wisdom and love for him and all his family, friends and acquaintances, or maybe just a small blessing to help someone in trouble or overcome a bigger obstacle, each received a good thought from a great soul. At the steps of the bimah there was a long line of people, like a river. Younger or older, Jewish or Christian, everyone was waiting patiently for their turn. Kol hakavod Shlomo for the mitzvah ghedola.

It is a compulsory festive mass that celebrates the fulfilment of a mitzvah, such as a wedding, a bar mitzva or a brit milah. 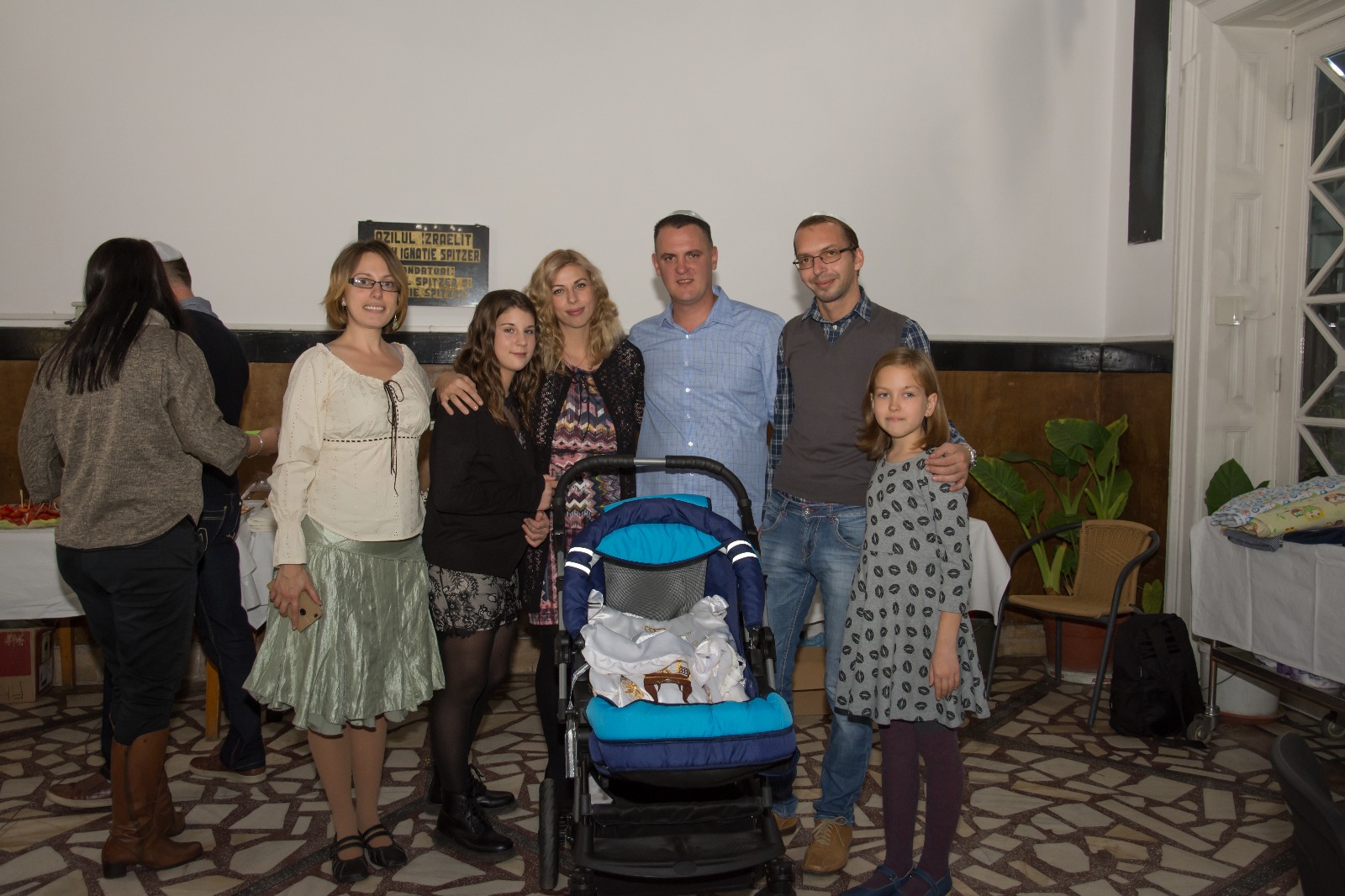 The Botezatu family managed to surpass itself, being already known for its chefs. The guests were able to taste Elda and Elinor’s famous falafel, the wonderful humus and other specific Jewish dishes. Of course, the question was “how do you do this?” and the recipe migrated from the host to the guest.

A difference in the ritual for this event is the fact that to the gratitude that is said after a meal to a Brit Milah some introductory words are added, called Nodeh Leshimcha. Here, the one who says prayer glorifies God, then asks mercy for the family and those present. Also a special prayer named Rachaman is said. Dances, jokes, good will, prayers, and the joy of being together have made us all happy for the Botezatu family’s happiness and  we wish all the members of the family peace, love, happiness and as many fulfillments as possible. And to the little Edi, a whole community wants you to grow big, healthy and strong, to be called to the Torah, to make many mitzvots and necessarily Tikkun Olam, a better world for all those who live their lives on this tiny planet. Welcome to a peace and teaching loving people, little boy.

”The man as the tree”