“The man as the tree”

On January 21st, 2019, the Jews from Arad gathered together, small and big, to celebrate the trees. The new year of trees, in Hebrew Tu Bishvat, is the first celebration, except the Shabbat, which is held in a Gregorian calendar year.

Though considered a minor feast, it is loved by Jews all over the world because it celebrates life and, as we know, the Jewish religion respects, protects and sustains life. In the panoply of Jewish thinking and culture of making Tikkun Olam, a better world for all the inhabitants of the Earth, life and nature have a special place. This is why trees, that support life on earth, have a feast of their own. Near Tu Bishvat, Jews from all over the world, but especially in Israel, begin to prepare seeds, saplings and all they need to plant something in the ground. In fact, in Israel, Tu Bishvat represents a massive and voluntary mobilization of the population to plant, regardless of the age. 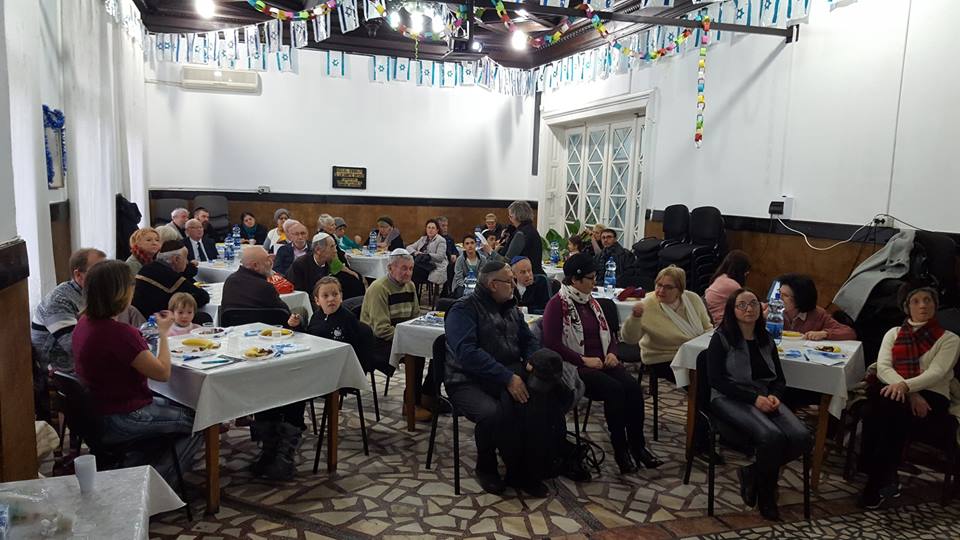 The small meeting of the Arad community on Tu Bishvat began with the speech of the President of the Jewish Community of Arad, Ionel Schlesinger, who made a presentation of what would happen.

“In the first part we enter the Tu Bishvat subject and Mrs. Dana Stana will read a story about this celebration. And because Mrs. Stana speaks a lot (laughter), we will project a two-minute clip that summarizes what Mrs. Stana said”, informs us the president. Of course everyone has tasted the joke, including Mrs. Stana, who read a brief description of the holiday. Then Danna Kalman, the secretary of the community, who usually facilitates the viewing and the translating from Hebrew (if it is necessary) of the movies to such events, came into action.

The most relevant video was the one that showed the massive plantations that took place all over Israel during this period. For those who do not speak neither Hebrew nor English, the community’s president explained certain moments while viewing. “After the fires in Haifa, they replant. Again a forest that was burned. Forests are being planted to prevent desertification. Arabs plant together with the Jews. Eliat, a place where birds are being watched. What is to be remembered is that there is an extraordinary mobilization throughout the country around this holiday to plant trees. Tu Bishvat Sameach! says Ionel Schlesinger. “

The leitmotif of the encounter was the similarity between the man and the tree, beautifully described by Ionel Schlesinger. “Like the tree, we, most of us here, have our roots in the ground. Our roots are in Israel, and the crown of trees is the essence of life itself. Miss Danna shows us a movie subtitled in both Hebrew and Romanian where the man is presented like a tree” says the president.

Like any Jewish holiday, the Tu Bishvat too got a bunch of songs, poems and dances.     The president of the community chose few less-known videos describing on musical notes the joy felt on the new year of the trees. Perhaps the most famous song of Tu Bishvat is “Hashkediah porachat” (Blooming almond), which speaks of the shining sun and the birds announcing the arrival of the feast. The song describes the earth that shouts that the time has come for planting, each man having this duty.

To honor the celebration according to the Jewish tradition, the participants were served with fruits and nuts of all kinds, representing, in different interpretations, the seasons, life, the earth of Israel, and the tree of life. The Tu Bishvat seder, thus, invokes the Kabbalistic themes of restoring the cosmic blessing by strengthening and repairing the tree of life.

To the joy of the children but not only, the event included two animations as a visual part of some wonderful musical works. The first was the “Blue Rhapsody” by the famous American composer of Jewish origin, George Gershwin, with the illustrations of Disney studios for the Fantasia 2000 project.

The second one presented the story of Noah and the creatures on the ark. “Our ancestor Noah, who, with his tiny boat, made the imprudence to save us,” jokes again the president.

The icing on the cake was the well-known movie clip in the musical “The Fiddler on the Roof,” during which the whole room hummed the song, sometimes even before the appropriate musical notes. The participants thus entered the world of the Russian Jew Tevie, the milkman, ironically asking the deity if it “would spoil some vast eternal plan to be a rich man.”

The celebration continued well after the formal conclusion of the meeting, through discussions between members of the community and the cheerfulness of the children who participated.

Historical personalities at the feast of chance and happening