The Romanian state celebrates this year a relevant historical moment in the existence of a country. The Centenary of the Great Union gives us the opportunity to remember the people who have built over the past 100 years, and long before, everything that is good here today. They come from different social stratum, many sons of peasants, others from nobility families and different ethnic groups. Persons who love the place and the people here have created something good and beautiful for us all. Among them are many Jews, some of whom, like Nina Cassian (poet) or Mihail Sebastian (writer), mention the 100 for Romania radio broadcasting. Other Jews, being doctors, teachers, journalists, peasants, workers, architects, actors, glorified by history, or forgotten in time, remain a significant part of the force that built this country.

Something less than a centenary

Exactly 30 years after the Great Romanian Union, the Jews would also fight for the founding of Israel. In terms of human life, the difference of three decades seems great, but if we think in the historical context, the two countries are about the same age.

The collective mentality of the Jews and the religion they practice has always been linked to the little piece of land we now call Israel.  In a joke, someone says “today I want to go all over Israel” and the other responds “and… what are you doing after the meal?”. A small territory for which the Jews fought and are fighting a big battle. This very continuous struggle was shown by an extremely well-established program in the Jewish Community of Arad on Thursday, April 19, 2018, starting at 17 o’clock, a day dedicated to the celebration of 70 years of modern Israel.

The “Yom Haatzmaut” cultural program (literally: Independence Day), held in Arad, debuted with a brief history of the people who are more than 5,700 years old, pointing only to some main events, such as the destruction of the two temples in Israel, life under the Roman occupation, diaspora pogroms, the resurrection of the Hebrew language, the Holocaust, and so forth, all in a short animation film. 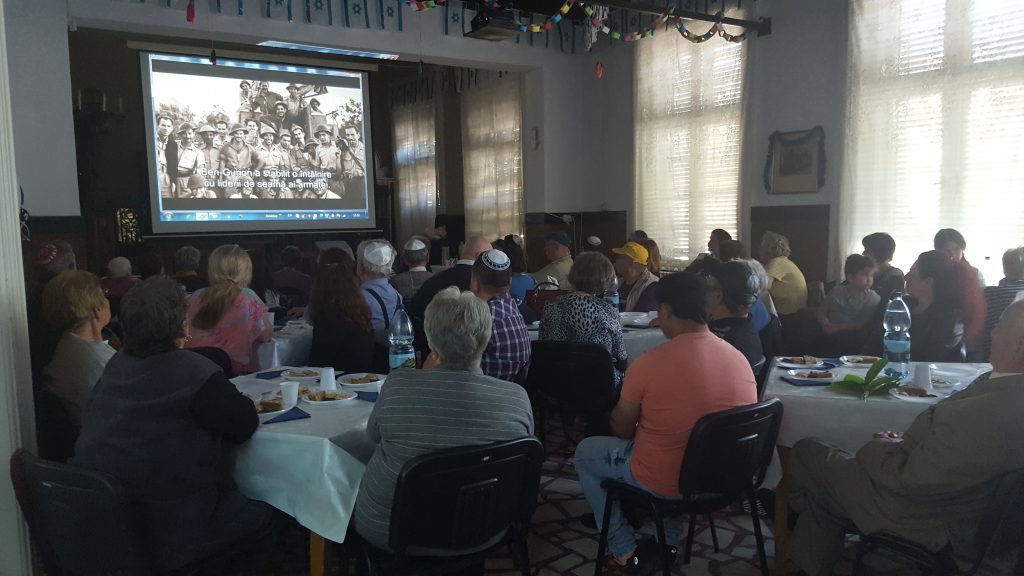 The song and the proclamation

The organizers prepared on each table two sheets, one with Israel’s proclamation of independence, for those who wanted to read the full text and the other with the transliteration and translation into Romanian of the song “Shir lashalom” (Song of Peace) by our cute secretary, Danna Kalman. The participants had the opportunity to study the document, while a movie was playing on the screen about the historical moment of the constitution of “Medinat Israel”, that is Israel state, on May 27, 1948.  If you wonder why we celebrate in April an event from May, it is due to the differences between the Gregorian calendar and the Hebrew calendar, a subject widely described in the Rosh Hodesh article.

In addition, when Yom Haatzmaut falls on Fridays or Saturdays, Independence Day can be celebrated two or even three days earlier than 5 Iyar (in the Jewish calendar) so as not to desacralize the Shabbat.

To the surprise of all, Ionel Schlesinger, the president of the Jewish Community of Arad, found the Jerusalem Post issue, then called The Palestine Post, in which it was published the press release on the establishment of the State of Israel. We went on to better know four of Israel’s founding parents.

The first was Theodor Herzl, who even as a young child was preoccupied to save the Jews. After he turned the issue on all sides, he even thought to Christianize the Jewish children in order to escape the pogroms, as an extreme solution. Finally, he has rejected this idea as unreliable and has been thinking more and more deeply about the founding of a country.

The film seen by the participants at Yom Haatzmaut, with brief interventions by president Schlesinger, was “The hope rebirth of Israel” from the US television station CBN news.

“You will see that we owe to Chaim Weizmann the Balfour statement,” says CEA president, visibly emotional and excited by one of the most prominent scientists and politicians on Earth. The English chemist, of Jewish origin, was asked during the First World War to prepare industrial quantities of acetone because it was necessary, among other things, to manufacture the cordite explosive.

At that time, the Germans had large amounts of calcium acetate, from which acetone was obtained, while in England there was a shortage. But Weizmann had discovered a new method of producing acetone, which used fermentation. He has developed the method for the English to be able to produce industrial quantities of acetone for their army. So he saved the British fleet in a serious logistical crisis.

His significant contribution to the outcome of the First World War helped him later to lobby for the Zionist cause in the British leadership circle, which led to the Balfour Declaration of November 2, 1917.

One of the most powerful personalities in the history of the Jewish people was a woman. Known as the “Iron Lady of Israeli Policy,” Golda Meir is the third person in the series of  “Founding Parents” shown by the President of the community to the participants at Yom Haatzmaut.

Her story illustrates a true leader, a woman of character, an extremely courageous person, determined to help the Jewish people.

The film presented by the president shows the family background of Golda Meir, her school life, involvement in Zionism, moving from America to Israel with her husband, life in the kibbutz, involvement in politics and her development into a charismatic leader.

Ben Gurion’s right hand, Golda Meir, wants to be the one who goes to America to raise funds from the Jews there to support Israel. And she’s right. She far exceeds any expectation. Her considerable effort provides decisive aid for the purchase of weapons to counteract the imminent attack of all Arab countries and save the new state.

A first-class negotiator and politician, Golda Meir, is sent to Amman, Jordan to meet with King Abdullah I of Transiordania, risking her life, even before Israel’s declaration of independence, disguised as an Arab woman. Her purpose was to make the king not declare war on the state of Israel, but, although he gives his word of honor, he then violates it. 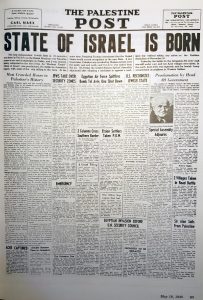 The last personality presented at the event organized on the occasion of the 70th anniversary of the state of Israel was David Ben-Gurion. He became the first Prime Minister of Israel, an accomplished man and leader.

Perhaps one of his most famous quotations is: “In Israel, to be realistic, you must believe in miracles. “Indeed, the mere existence of Israel, despite all vicissitudes, can already be considered a miracle, and the story continues with the challenges of our days.

To show how and where the holy country is in this moment, Ionel Schlesinger chose to present the film “Israel today” where you can see the Israeli contribution to scientific and technological advances, to improving the lives of people around the world.

From the land of swamps, full of malaria and the inhospitable desert, the Israelis built the land of “milk and honey” with the highest technological level, with one of the greatest development indices on the planet where all religions can prosper in peace, the country where Christian Arabs feel the best, where the Druze Arabs are Israel’s most loyal defenders and the most ardent fighters in the Israeli army.

The city of Haifa is the center of the Bahai religion and be it Tel Aviv, Jerusalem, Rishon LeZion or Petah Tikva, you have a great chance to see the thriving trade and tourism, people dancing on the street or doing yoga in public places, unusual cultural events, flash mobs and ad hoc concerts.

The event continued with a juice break, coffee and socializing. There followed Shir Lashalom (Song for Peace) sang by the audience who knew the song. The surprise Danna  told the guests was created with a special culinary talent of Avraham Ehrenfeld and Rivka Ehrenfeld. Thus the rabbi and his wife prepared a portion of pita stuffed with humus, falafel and  a vegetable mixture for each participant.

And if we think that the room was full, the work of the two is much more appreciated.

So we say in Hebrew a well-earned: Kol hakavod mar ve giveret Ehrenfeld ve toda raba. (You have all our respect Mr. and Mrs. Ehrenfeld and thank you very.)

This time, the president of the community chose the 2016 version of Hatikva, the national anthem of Israel. A hymn with melodic roots in the Romanian culture, reminding us, once again, how bound are Israel and Romania.