“These Jews are constantly celebrating,” that’s how every festivity presented by Ionel Schlesinger, the president of the Jewish community in Arad, begins, a moment that provokes many laughs. This time, the Jews from Arad gathered together, young and old, on the second day of March for a celebration as if from books of stories with kings and queens. 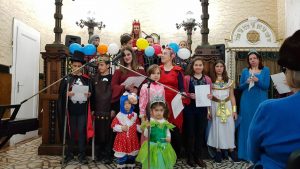 Indeed, the feast of Purim is about King A Ahashverosh, the ruler of Persia, who is convinced by his counselor Haman to kill all the Jews in the kingdom. However, Queen Esther, who was Jewish, together with her uncle, Mordehai, who once saved the king, managed to prevent the pogrom and obtain the king’s favor. 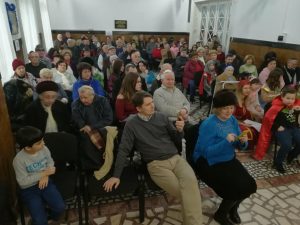 The Jewish Community of Arad celebrated Purim with a lot of music and good will, with the help of the already established artists from Arad, professor Dor Niculescu at the piano, with Ana Maria Joldea, a pupil at “Sabin Drăgoi” Art High School, at the violin, as well as soloists Ioan Moţiu (tenor) and Mirela Cusursuz (soprano), both lyrical artists of the State Philharmonic of Arad. 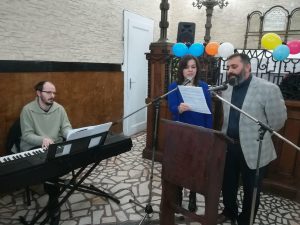 The show was continued by the children who participate at the Hebrew and Jewish traditions course, who, under the guidance of two volunteers, Elda Botezatu and Margareta Szegő, presented a small artistic program. Thus, the audience could hear specific Purim songs such as Leitzan Katan Nehmad (A Little Nice Clown), Ani Purim (I am Purim) or Chag Purim (Feast of Purim) sung by children aged 3 to 18, dressed in fairies, clowns, mice, pharaohs, queens, knights coming from Camelot or, on the contrary, Jedi Knights coming from the future built by George Lucas. The children’s show was opened with  Mark Vizental’s presentation, who described the Purim feast. 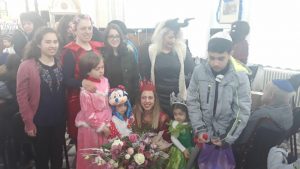 For the wonderful show, the children received from the Community of the Jews from Arad, with the kindness of the staff, mainly with the help of Danna Kalman and Dora Jurcă, who were involved in the acquirement and organization, as well as the president of the community Ionel Schlesinger, a package of well-deserved sweets. 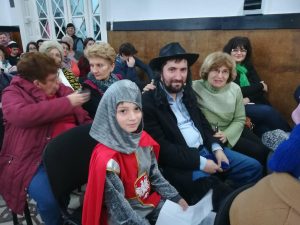 The event ended with many photos taken, first of all of the costumed people, because the adults did not lower the bar. Also, the participants wanted to thank the performers for the extraordinary show and to stay with them and the other members of the community for more stories. 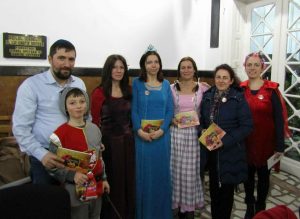 After the show of Purim, candle lighting and the prayer of receiving the Shabbat called Kabbalat Shabat, followed by Oneg Shabat, the jubilation of Shabbat and Kidush, the ceremony of prayer and blessing of the wine all made in a wonderful Idish and Hebrew with a a combination of a predominantly Hungarian accent by Rona Pishta, the community worshiper.