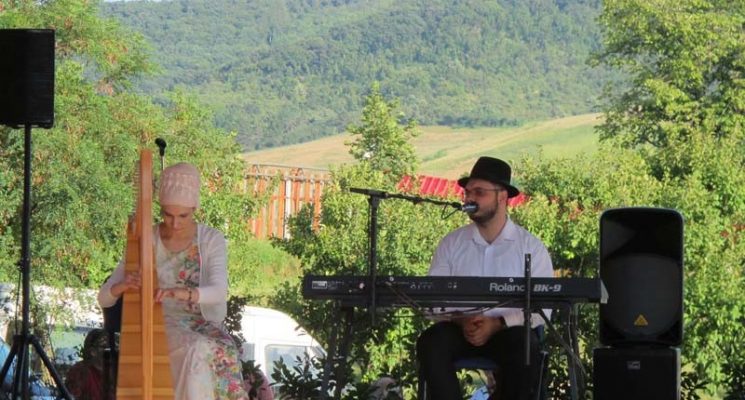 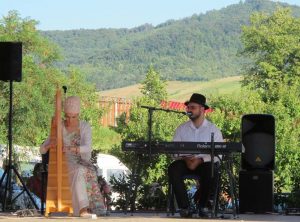 On Sunday, the 10th of July 2016, has been held the third edition of the “Festival of Minorities” at Covăsânț. Like two years ago our community was represented by the young and very talented Rebeca Iancu and Emanoil Pusztai. Although the material presented by them was very different from those of the other participants, the audience has enjoyed it, particularly the exceptional implementation, participating actively by clapping, to underscore the rhythm of songs, some of which were known as worldwide hits (Hevenu Shalom Aleichem, Hava Nagila, etc). 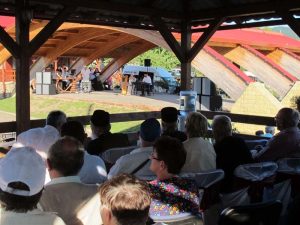 On the website of the Archdiocese of Arad, Protos. Dr. Justin Popovic describes the event as follows:
“This year’s event was organized by the Orthodox Parish of Covăsânţ (exemplary involvement of the parish priest Mihai Octavian Blaj), and the Association “Romanian Traditions Keepers” of Covăsânţ, in collaboration with the Arad County Council’s Cultural Centre.

The event was held at the Romanian Orthodox Parish of Covăsânț’s Orthodox Camp for keeping and preservation of Romanian traditions. The artists present on the stage were Jewish, Slovak, Serbian and Hungarian minorities’ bands from Arad county: the group “Daniel’s Brothers” representing the Hungarian minority of Ghioroc and the Ensemble “Keepers of Tradition” of the Orthodox Parish of Covăsânţ, whom presented traditional folk songs and dances from the Arad Vineyard.
The aim of the festival, since its establishment, is that minorities to be known by their songs, customs and traditional folk dances, all of these set within a complex cultural event. Also, it was wanted and it is wanted to further emphasize the good relations between Romanians from Arad county and minorities, regardless of ethnicity, with only one goal: to ensure a climate of peace and good coexistence between them. 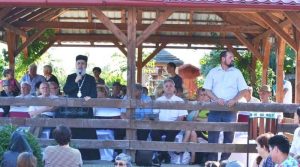 In his speech delivered on this occasion, His Eminence Timotei appreciated the talent of the participants and recalled the good interethnic relations and intercultural coexistence always present in this part of the country, reiterating that Arad as a border county, has the duty to cultivate good relations with everyone in the region. In the end he congratulated the organizers and all the young participants.
The president of the Jewish community in Arad, Ionel Schlesinger, has appreciated the climate of peace and respect for the values of ethnic communities in this part of the country offered by the church under the coordination of His Eminence Timotei.
Parish priest Octavian Blaj thanked for the presence of His Eminence Archbishop Timotei and all participants at this event and noted that the municipality of Arad and the entire county should be regarded as one rich cultural heritage, as each ethnic group has contributed to the architecture of the area, the promotion of cultural and economic development of this part of the country.“