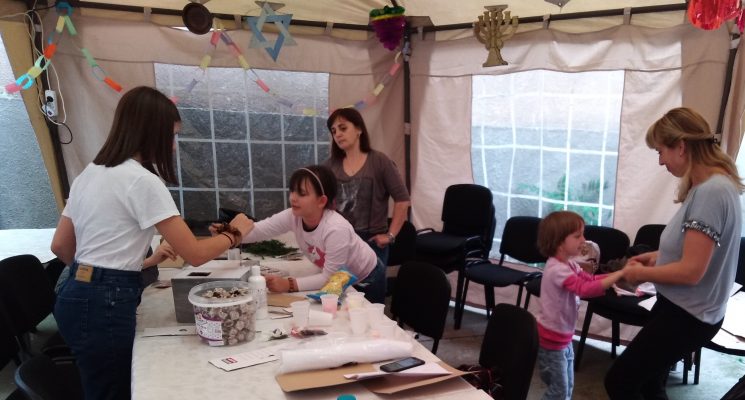 The Hebrew club moved  in the sukkah

For eight days, starting with the evening of October 13, 2019, members of the Jewish Community of Arad celebrated the Sukkot. The feast of tabernacles or tents begins about two weeks after the Jewish New Year and falls during the harvest period in Israel. Tradition says that every Jew should sit in a sukkah, that is, a kind of tent whose roof must be made of plants. Such a tent was also built in the courtyard of the elderly home of the Jewish Community of Arad, being used for both holiday celebrations and other activities, each resident of the elderly home or community member being able to sit in the tent to read, listen to music, talk with others, etc.

For a better understanding of all this things Elda Botezatul brought glues, cardboard boxes, acrylic brushes and other materials to build a sukkah. The skilful little hands have each found something to do, being helped by both organizers and Adriana Reckerth, one of the moms. Thus, the children managed to do the layout without getting so dirty. Sorana, one of the children, came up with a more daring idea to decorate sukkah. She took leaves from which she made stamps of all colors and together with her friend Karo created multicolored patterns. Elinor, being a few years older, revived some of the old sukkah ornaments. Even the baby of the Botezatu family came into play, wanting to take down all the wonderful brightly colored ornaments brought by his parents from Israel.

Of course, the activity also had its share of socialization in which the children talked and played freely. The warm and beautiful weather allowed the activity to last for several hours.

The feast of tabernacles between old and new