On the 22nd of October, our community participated in a national lecture program held at the same time in our city as well as in Botoșani, Brașov, Cluj, Iași, Oradea, Târgu Mureș and Timișoara.

Event participants learned that in Hebrew “rosh” means “head” or “beginning”, “hodesh” is the calendar month, and “mesiba” is “party”. But for every town mentioned, the party for the beginning of the month was different, because the organization was done locally. Thus, in Arad, there were some lectures on Jewish culture, a Swedish buffet type snack, offered by the hosts and, like at any party, much – much music and good will.

The main themes such as Jewish traditions, the calendar, the new month, the earth’s natural satellite, the power and the wisdom of women, the beginnings (of various kinds) were very well represented in both the speeches offered by Margaret Szegö, Rabbi Avraham Ehrenfeld, and the music presented by Ionel Schlesinger, President of the Community.

The event began with the rabbi’s speech, in which he presented both the meaning of the feast and Rosh Hodesh’s customs, such as the purchase and wearing of new clothing by the woman, or the blessings and prayers spoken. Rosh Hodesh is the new moon celebrated by the Jews as a physical renewal (due to the woman’s menstrual cycle) as well as psychological and spiritual.

Between the Gregorian calendar, the Muslim and the Jewish calendar, there are important differences both in structure and in their use, a subject dealt with in detail by Margareta Szegő, which showed how each of them works. 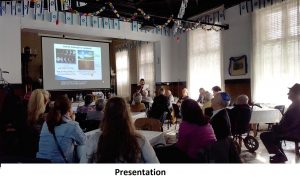 The Gregorian Clendar is divided into four seasons, and a holiday like Christmas always falls in the same season (winter). Muslims, on the other hand, use a Lunar calendar, and their holidays migrate in different seasons, the month in a Lunar calendar has 30 or 29 days, because the Moon’s revolution around the Earth is about 29.5 days.

The calendar of Jews based both on the Moon and on the Sun has migratory holidays, but not from one season to the next. In order to keep track of the seasons as much as possible, the Jews are adjusting their calendar with a leap year and are doing this every seven or nineteen years. Just as in the bisect year of the Gregorian calendar, there´s one extra day (February 29), there is an extra month in the Jewish calendar, so we will have two months called Adar, Adar I being the extra month. Such a year is called in Hebrew Shanah Me’uberet.

It is said that in a synagogue, a person asked when is Hannukah this year. Smiling, another person answers “On 25 Kislev. Just like last year!” The example shows that the Jewish holidays do NOT change their dates from one year to the next, they stay the same day in the Jewish calendar, the difference is when we go from the Jewish calendar to the Gregorian one, current in Romania and most countries in the world.

Towards the end of the event, Mr. President thanked everyone present because they were with us, especially Rabbi Avraham Ehrenfeld and Margareta Szegő for their presentations, as well as Danna Kalman and Anca Ahălani, together with the entire team at the Elders Home for the organization. 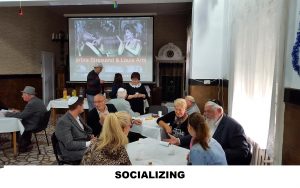 The little party ended, in a specific Jewish style, with the participants going from one table to the next, each wanting to speak at least a little bit with all those present. People have formed new ties, reinforcing the old ones. Friends have given a refresh to information about those they have not seen for a long time, enjoying their presence.

Me and the community