A group of 15 members of the Jewish Community of Arad participated at the unveiling of one of the most monumental work of art in Hungary. The opening of the panoramic painting created by Corvus Kora Robert took place on Sunday, April 10, 2011, in Lököshaza, in the presence of mayor Szücsné Gergely Győrgyi, the local officials and several prominent guests in the field of arts.

Corvus Kora Robert has already done four works of these dimensions, the first being ready in 1996. He has had numerous works exhibited both in Hungary and abroad, being highly appreciated by art critics.

This time the artist chose to create a work dedicated to the victims of the Holocaust in which he shows the life of a Jewish family before and after the Holocaust. Unfortunately, as has happened with many families, only one of the persons that we saw two scenes earlier survived, and she is tormented by the pain of losing all loved ones. Somehow, the young woman finds in her the immense power to move on, arrives in Israel and creates a family, a new life growing in her womb, the hope of a new generation. 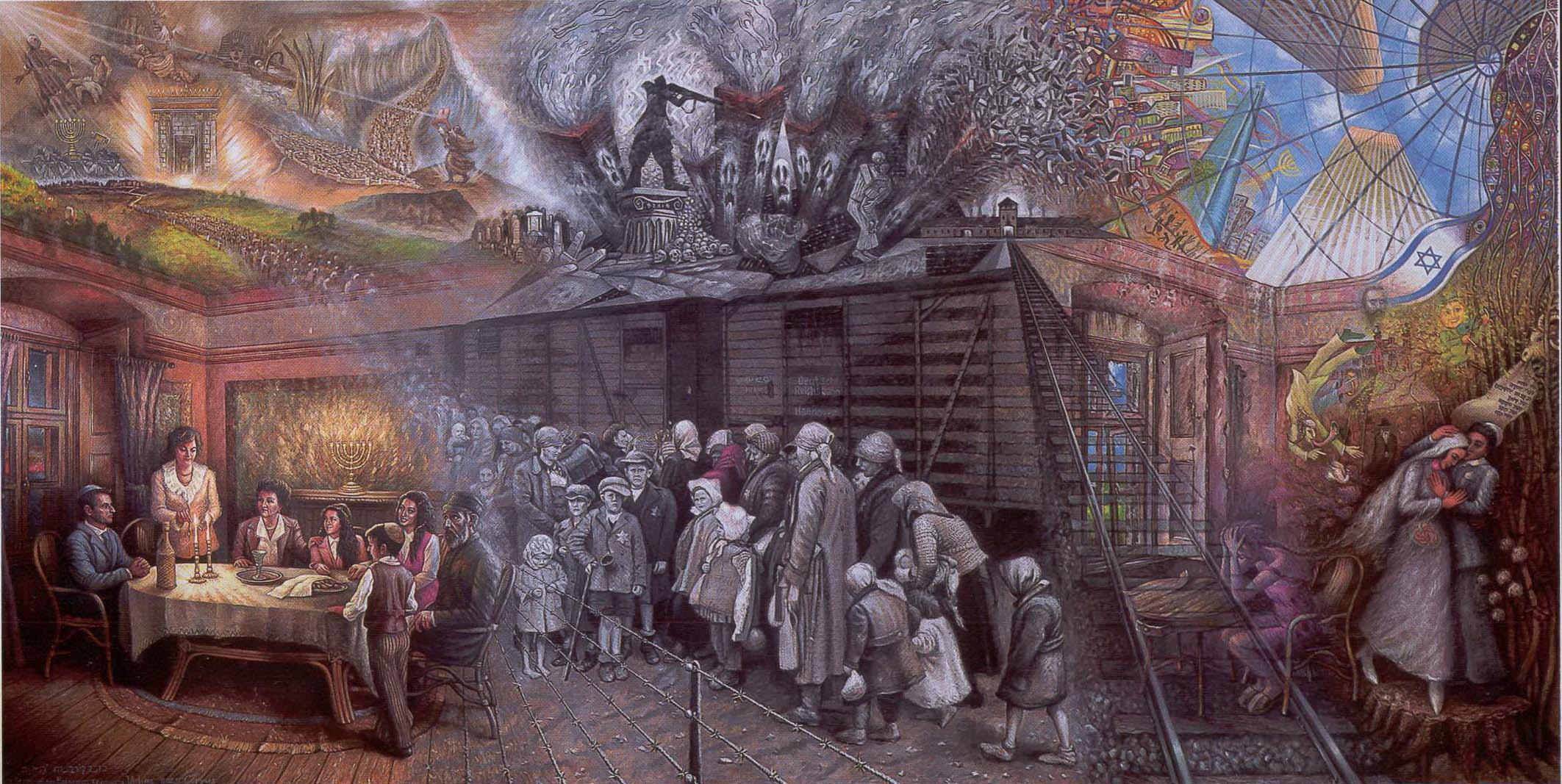 Using many painting techniques, combined in a way that surprises by the approach and by their harmonious merging, Corvus Kora presents us several scenes from Jewish history, in the same work. Starting with the times of the patriarchs and ending with the construction of skyscrapers in Tel Aviv, the images speak of the troubled history of a great people.

The opening attended by the participants from Arad focused on the Holocaust theme, which represents the central part of the work. The opening speech was given by history professor Csajányi Melinda, who spoke about the persecutions and the Holocaust in Hungary. The actor Bartus Gyula and the artist Jankay Tibor followed, performing a dialogue on the same subject. Of course, the representatives of the communities in Hungary, the Mazsihis, that is, the Federation of Jewish Communities in Hungary, took the floor, for whom spoke Dr. Feldmájer Péter, its president. Markovits Zsolt, the first rabbi in Szeged, also delivered a speech on the subject of religion.

The author of the painting spoke about the ideas, thoughts and feelings that inspired him. He passionately reported about the steps taken, about the documentation made and the need to show the world the drama of a people who gave so many values.  He told how the last part of the work was made after a documentary trip to Israel, where he was inspired for the piece representing the city of spring, Tel Aviv, a symbol of hope and power to continue despite all difficulties.

In addition to this work, the participants could also admire other works signed by Corvus Kora Robert exhibited in the main part of the Lököshaza culture house. The author also kindly replied to each participant who wished to dialogue with him.

Impressed by the impact of the work on those present Ionel Schlesinger, the president of the Jewish community of Arad discussed with the painter to organize an exhibition in Arad too. Thus, the trip of our community members to Lőkösháza gave the opportunity to prepare a new cultural event for the city upon Mureș. In the Hungarian city, Ionel Schlesinger and Corvus Kora Robert established that the first exhibition in Romania of the monumental work will be held in Arad on the occasion of the national commemoration of the Holocaust victims on October 9th.