The art of beautiful language and musical notes covered the neolog synagogue in Arad in the noon of May 11, 2018, Friday before the Shabbat, through the songs of art highschool students and the release of a volume of poems. Under the Romania 100 – Israel 70 motto both the Centenary of the Great Union and the Independence of the State of Israel were celebrated. Thus, the “Vasile Goldiş” Western University of Arad organized through the “Academician Nicolae Cajal” Jewish Studies Center one of its best events, bringing among the people of Arad, Ada Segal Shefer, the rebel poet named “Saltimbanca of the Metaphors” by Nina Cassian herself.

The event began with the warm welcome of university professor Marius Grec, the director of the Center for Jewish Studies, who expressed his gratitude for the long and intense collaboration between UVVG and the Jewish Community of Arad, thanking the community also for participating in the organization of this event. 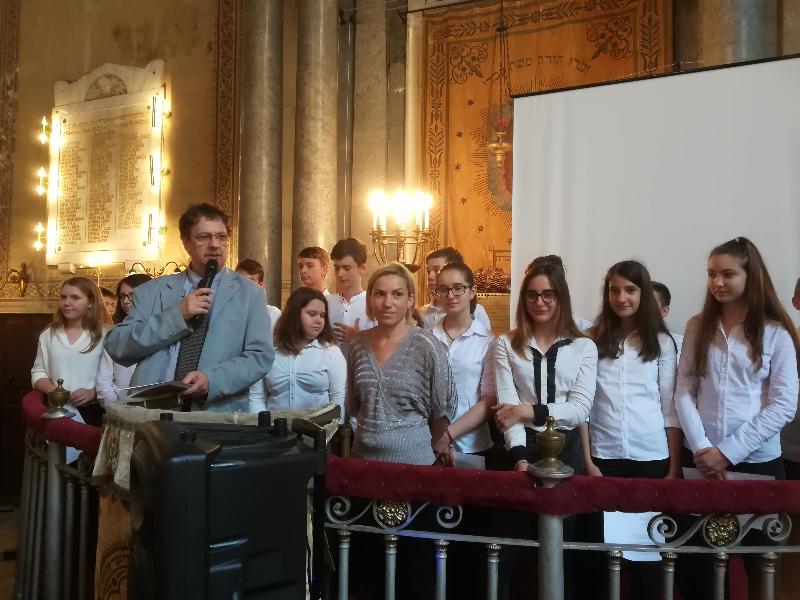 The journalist Irina Airiniei, president of Anima Fori, said some words about poet Ada Segal Shefer, describing her as “a romantic lost and found on the unique cloth of dreams from an inner athanor from which the past of the ancient and poetic Jewish neighborhood “«props us with its eyes».”

The “Silver Bells” Choir, consisting of the students of the gymnasium classes of the Sabin Drăgoi College of Arts, directed by Prof. Adina Gabor and accompanied by Prof. Dor Niculescu, entertained this time the audience made up of high school students; academics, both from the organizing university “Vasile Goldiş” and from “Aurel Vlaicu” University; as well as journalists, teachers and literati.

The climax of the event was the interpretation of her own poems by Ada Shefer, who spoke about moments of her life with sentimental weight, many related to her artistic life or to her poetry teacher, and friend, Nina Cassian. 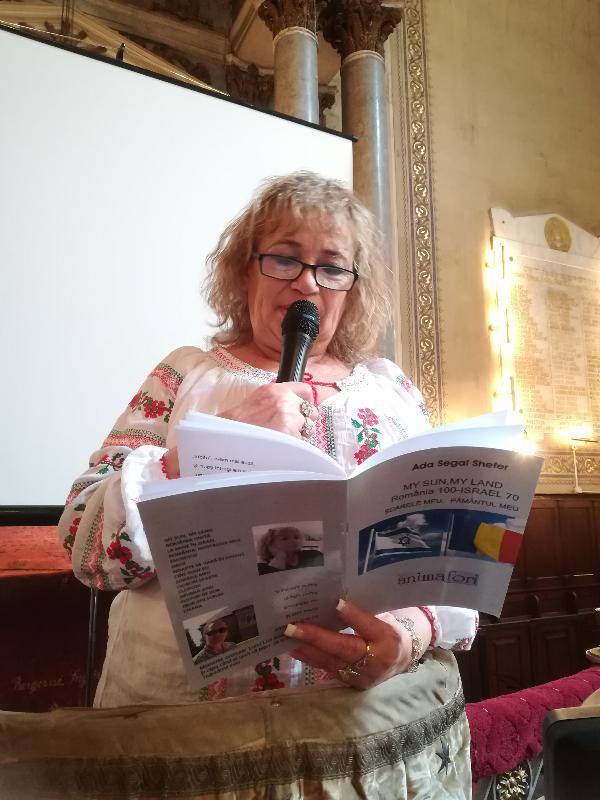 About Ada Segal Shefer we must know that she is a Jew between two worlds, Romania and Israel, whom she loves with the same strength. The way in which she describes her native country, Romania, is full of fervour and hankering because the poet longs for “the fragrance of forests and leaves” as it implies both in the poem “Romania, my nostalgia” and in other creations in lyrics. The poems from “My Sun, my land, Romania 100-Israel 70” lyrics booklet signed by Ada Segal Shefer are written in English, Romanian and Hebrew and contain poems such as “Dacians”, “Eminescu”, “My Sun, My Land, Romania 100-Israel 70”, “United Romania”, “Who I am”, “Bells”, “Butterflies of  longing”. Her poems in Hebrew are put on notes and interpreted by various authors such as Lucci Lior Arielly or Shlomo Josefsohn, songs that were heard on this occasion in Arad`s neologist synagogue too. 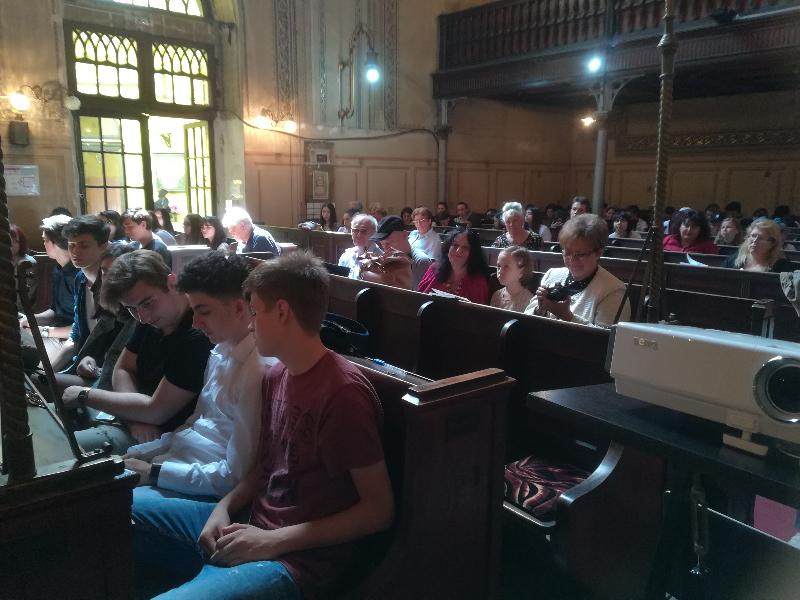 Ionel Schlesinger, the president of the Jewish Community of Arad, thanked everyone for his participation and said that while Marius Grec never “forgave” him with praise, the community’s contribution was simply to provide the synagogue. “But we are glad that such an event involving both the Centenary of the Great Union and the Independence of the State of Israel took place in our synagogue,” said Ionel Schlesinger.

The participants received both the anniversary number of STUDIA JUDAICA ARADENSIS, dedicated to the state of Israel, and the booklet with poems signed by Ada Shefer.