We know that Ionel Schelsinger, president of the Jewish community in Arad, prepares daily a pleasant surprise for the members who take part in the programs organized by our community. This time, he made a technical bridge between rabbinical teachings and participants in the 12th edition of the Keshet Day National Program.

The event, which was held on the morning of June 10, 2018, brought Rafael Shaffer, the chief rabbi of Romania in a virtual appearance among those present, with a series of well-chosen video clips to explain the main concepts of Judaism to the Arad`s Jews.

The first explored idea was the day of Shabbat for the Jews, the seventh day of the week, yom rishon (the first day) being Sunday. The religious and philosophical essence of Shabbat, not to make changes to creation, was explained by rabbi Shaffer starting with the natural question: Why do not we have ten-day weeks? “When our people keep and honor this day of Shabbat. In fact, we keep the memory of the creation of the universe … There are jobs that we are not allowed to do. We can work. We are allowed to move the furniture in the house until we are weary. But we are not allowed to do any creative work.” Being the day of spirituality, man has to focus on it, to find it in himself and in those next to him. “Spirituality, or at least its seed, exists in each of us. Why don`t we enjoy it? Because we’re always on the run. We don`t have time to think about it. When we lower the rhythm, there is nothing more to stop spirituality, and it sparks out by itself. We lower the rhythm and pay attention to our spirituality. This is what Shabbat makes, in a spiritual day “, adds the rabbi in the video created by TVR Cluj. 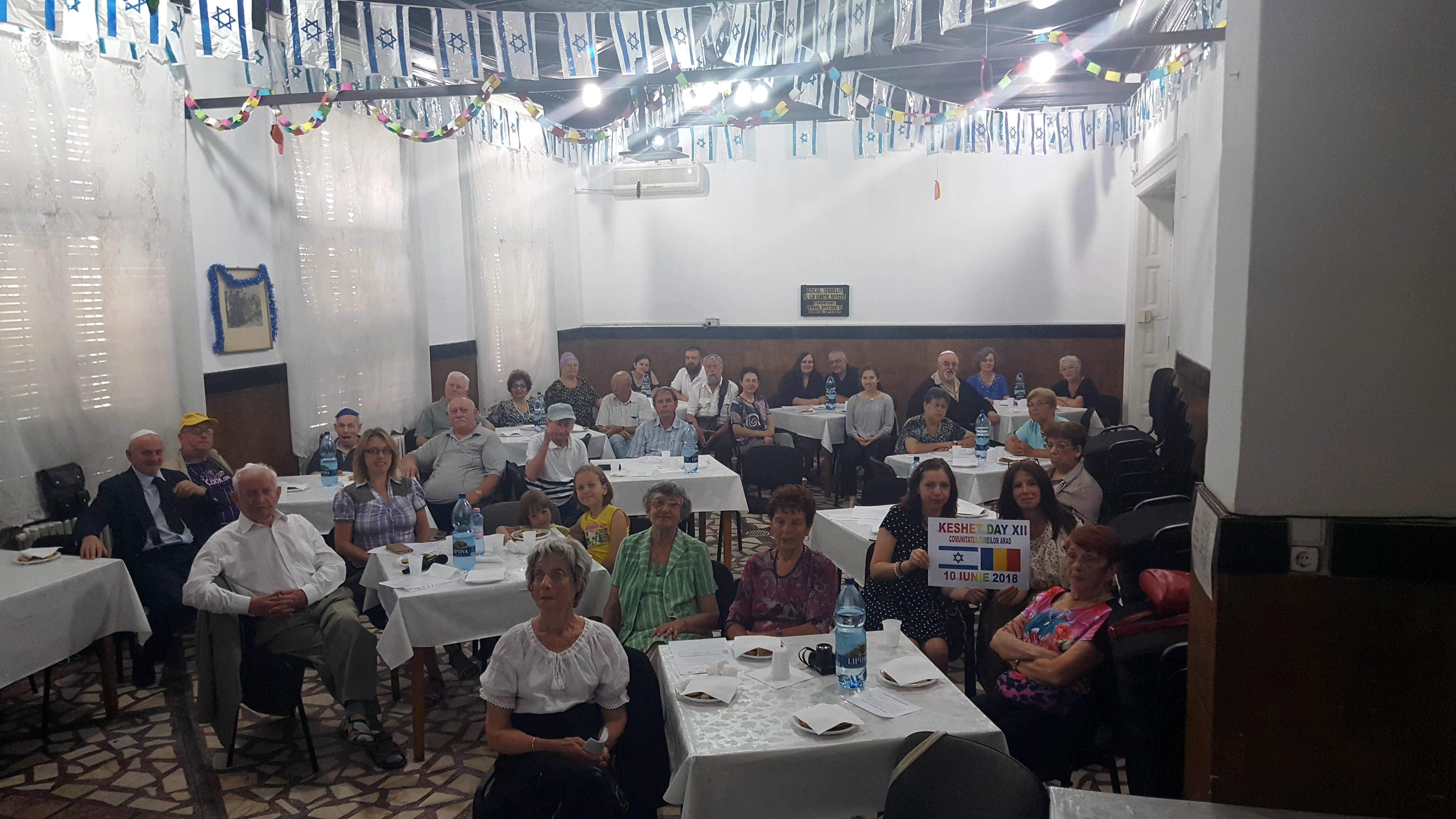 Jokingly or seriously, Ionel Schlesinger thanked the Rabbi and asked Mr. Ronai, the secretary of the Cluj community, to explain another symbol of Judaism, namely, the mezuzah. Thus, the TVR Cluj footage, from the “Signs and Symbols” cycle, was shown, where Ronai gives essential details about what is and how to put a mezuzah in the door of the house, the blessing that is said and the prayers made. “We thank Mr Ronai and we ask the Rabbi to tell us about the kippah,” says, smiling, the president. ” The Kippah is this,” says the rabbi taking his kippa from his head to show it to the TVR operator. A small child in the hall exclaims, “I knew that!” to the delight of the people from the same table. The participants smile and turn their eyes to the screen, where a multitude of Kippahs, follow each other, one more decorated than the other, in garish or more sober colors, some knitted, others of leather, each representing the personality of the bearer or the Jewish stream from which he comes. “Jewish men cover their heads during prayer,” says the TVR footage, on a soundscape of the Tumbalalaika melody, and a filming from the beautiful synagogue in Arad, where many of Keshet day participants could see themselves at a another community event.

“Do you recognize the synagogue? And because you just saw Mr Mendel (a.n. in the filming), we ask him to tell us how a Jewish wedding takes place,” adds Ionel Schlesinger, looking at one of the most prominent members of the Arad community. Laurean Mendel’s speech is interesting, short and straightforward, revealing the author’s teaching traits. It is followed by a short video about the Jewish wedding, which highlights the obligations of the grooms both to each other and to the society in which they live, showing once again the highly responsible communitarian character of the Jewish religion. 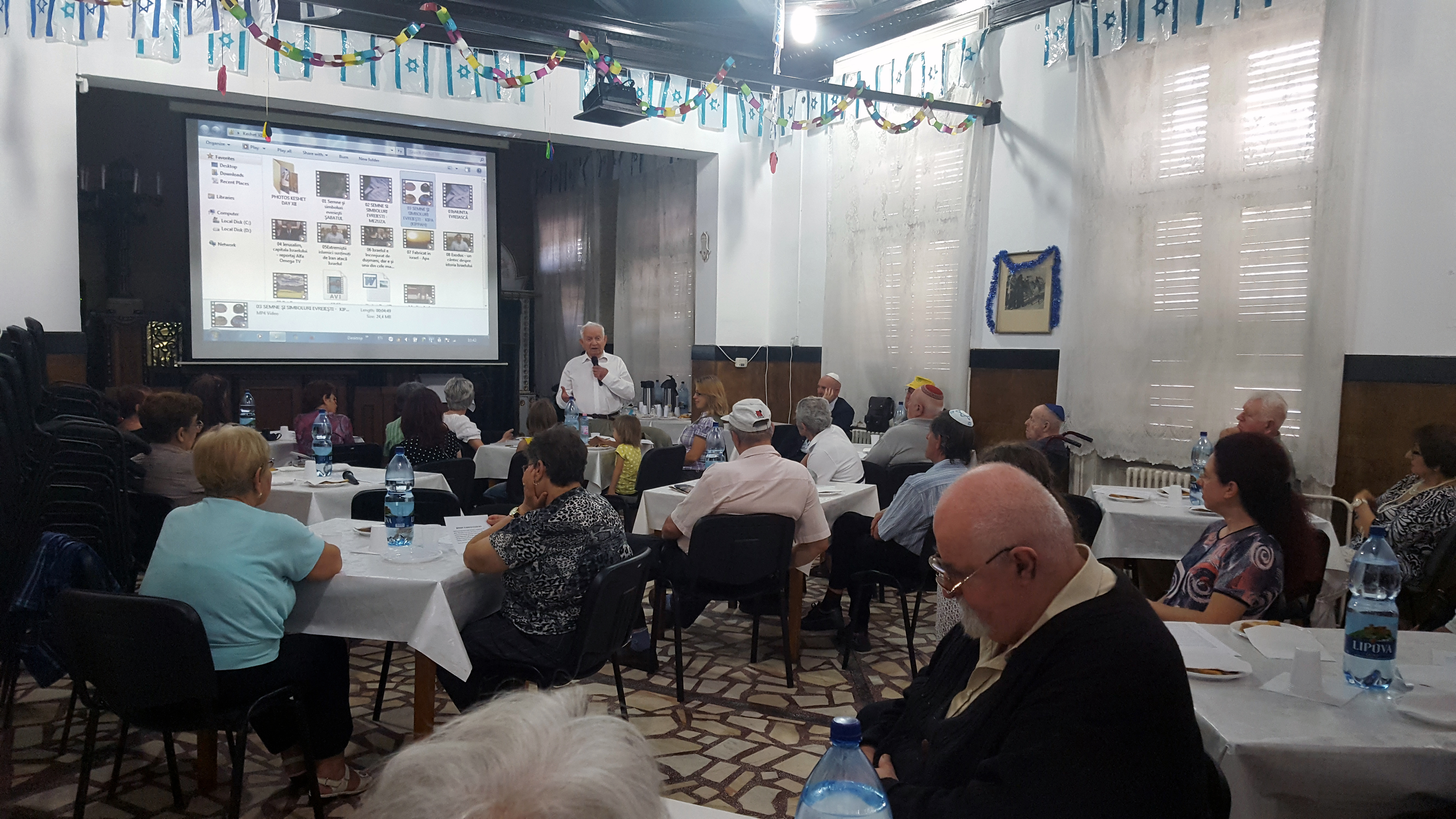 The usual coffee break, cakes and socializing time is set on melodies by well-known artist Andé Rieu and then on a fragment from the work of Giuseppe Verdi’s Nabucco opera, namely, the choir of Jewish slaves. After the coffee break, several issues related to Israel have been addressed, such as the current problems of the state; Jerusalem, the capital of Israel, the policy of the Trump administration over Israel, the relationship between Romania and Israel, the role of Christian churches in support of the state of Israel the attacks of the extremists that Israel has to endure on a daily basis, the Israelis lives under terror and the human shields that Hamas uses.

With all the challenges, Israel manages to defend its multiethnic population and create a state in which cultural life, technological and social innovation give a tone of happiness. There are two videos showing Israel’s defense against terrorism and technological innovations made by Israelis. The video extracted from CBN’s “Made in Israel” documentary talks about the difficulties faced by one of the smallest and most prosperous countries in the world and shows the solutions found.

In the realm whereTorah says Moses hit the rock to have water, the Jews are shaping technology through creativity to get hold of one of the things without which humans can not survive. Thus, the documentary shows how cleverly used are the water of the Sea of Galilee, the Mediterranean Sea and the water reservoirs under the Negev desert, as well as the extremely high recycling rate of domestic water.

The seven decades of the modern era, when Israel faced severe drought, led to the most outstanding innovations in this field. One of them is the drop, or dripping directly to the root of the plant, so that none of the precious liquid gets lost.

We see how the innovative process that has so far increased Israel’s agricultural productivity is nowadays used by many of the other states in the world that are experiencing desertification. This is another example of the transfer of Israeli know-how to the outside and the saving of many lives and the consequence of the Jewish principle of Tikkun Olam, to repair the world by making it better for all the inhabitants of this small stones that spins around the sun. Another video was about the emblematic song of the movie “Exodus,” for which Pet Boone, a well-known, much  appreciated composer and American actor, created the lyrics.

Being a Christian himself, Pet Boone, speaks of the divine inspiration he had when he wrote, “This land is mine, God gave it to me.” The clip with the song “Exodus” then echoed to the admiration of the participants.

The event ended with the Hatikva intonation and another round of socialization of the participants.

Receiving the Torah celebrated in Arad