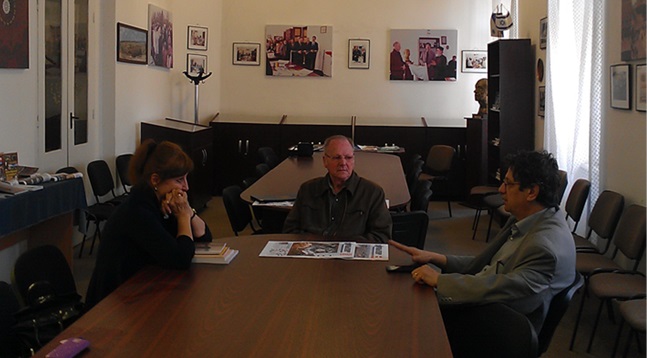 Material taken from the newspaper “Europeanul”

On May the 19th, 2016, in Arad was organized a seminar for history teachers, under the title: Teaching the Holocaust in schools in Romania, given that Romania took over in March 2016 Presidency of the International Holocaust Remembrance Alliance (IHRA).

The event was honored by Dr. Chava Baruch, educator in the Department for Central International School for Holocaust Studies “Yad Vashem” (Israel).

Meetings with teachers – and pupils – were held in the Festive Hall of the National College “Moise Nicoara” of Arad. Together with Dr. Chava Baruch, have been: Eng. Ionel Schlesinger, President of the Jewish Community in Arad, PhD. Simona Stiger, from the School Inspectorate Arad – Member of the Scientific Council of the Center for Jewish Studies “Academician Nicolae Cajal” of Arad, coordinator of the seminar is Dr. Adelina Stoenescu from the Museum of Arad.

Dr. Chava Baruch was born in Hungary but emigrated to Israel in 1964. She graduated from Tel Aviv University and Hebrew University of Jerusalem – specialization History – her scientific research is focused on the issue of Neologue Hebrew Communities in Budapest during 1941-1943, that the Jewish ghetto in 1944. In the “Yad Vashem” Institute , Dr. Chava Baruch coordinates seminars for teachers in Romania, Hungary, Croatia, Serbia, Slovakia, Czech Republic and Albania. Arad topics addressed by Dr. Chava Baruch were diverse and extremely interesting:

An important point of presence in Arad Mrs. Baruch was the visit on Friday May the 20th at the Center for Jewish Studies in Arad, located inside the Jewish Community’s Neologue Synagogue of Arad. On this occasion, Mrs. Dr. Chava Baruch had a history of successful meeting with Director of the Center for Jewish Studies in Arad, Prof. Dr. dr. Marius Ioan Grec and Jewish Community President of Arad, Ionel Schlesinger, on topics of common interest.

It was discussed the importance – for Romania – of taking over the Presidency of IHRA, some aspects of the debate from last month at the Foreign Ministry, where there were present some of the centers of Jewish studies in Romania – including the one in Arad and how the “Yad Vashem Institute” may engage in educational activities – which must take place both in the pre-university and university education – awareness of the danger hanging over the contemporary world, if xenophobic mentalities, such as those that led to the outbreak of the world war II persist.

Later on the Neologue Synagogue was visited – an exceptional architectural building – a building that two years ago celebrated 180 years of existence. The history of the synagogue is related to reformer Rabbi Aaron Chorin, this year being celebrated 250 years from his birth. Mrs. Baruch, a Neologue studies specialist, was thrilled about the visit and the results, resulting in an intensification of links between Arad and “Yad Vashem Institute”.

THE SOUNDS OF JOY