The Arad State Philharmonic, together with the Jewish community from the city on Mureş, bring the opportunity of unprecedented initiatives in which the synagogue organ is raised to its true value in order to delight Arad´s citizens.

This endeavor was accomplished by Doru Orban, the director of the Arad Philharmonic, together with his team of artists and Henriette Andrea Nagy, the new acquisition of the institution, an organist born in our city but refined in the mysteries of the wonderful instrument right in the capital of Austria, as well as by Ionel Schlesinger, president of the Jewish Community of Arad, who has continuously supported the efforts of the interpreters, facilitating access to the neologue synagogue organ. 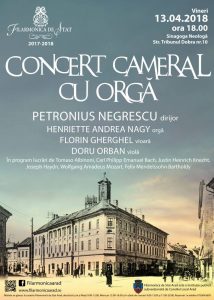 The first show, from a series of events of this extremely beautiful collaboration between the Arad Philharmonic, which comes with the artists and the Jewish Community of Arad, which provides the synagogue and the organ, took place on Friday, April 13, 2018, from 18 o’clock. The concert in which the synagogue organ had the main role was held by organist Henriette Andrea Nagy, Florin Gherghel at violin, and Doru Orban at viola.

The artists were led by the wand of conductor Petronius Negrescu, whose wide range of courses, distinctions and collaborations began with the “George Enescu” Art High School in Bucharest, whose pupil was from 8 years old, continues with the Jazz festivals in Poland, Greece, Bulgaria, Spain and with orchestra studies at Händel Akademie-Karlsruhe in Germany. He also received a postgraduate scholarship in the United States in 2008, where he was assistant conductor for Master Larry Livingston and participated as an instrumentalist in the Idellwild Festival Orchestra, with whom he concerts in the famous Disney Hall and had an internship at which he attended the Los Angeles Philharmonic, Pacific Symphony, Los Angeles Opera, USC Thornton Orchestra, the periplus finalizing with a “Certificate of Highest Distinction”.

“It was a great pleasure to collaborate with both the distinguished conductor Petronius Negrescu and the artists of the Arad Philharmonic. The first time we sang Albinoni, which fit very well with the organ of the synagogue. I also enjoyed singing Haydn again, which I played in Vienna, ” says organist Henriette Nagy.

“After the concert I went down and talked to many of the participants, and the audience was delighted and glad to meet us. What struck me was the invitation of President Ionel Schlesinger to make concerts in the synagogue at any time, and I thank him in this way. I am honored to be able to concert with such artists at an organ of this great value, ” says Henriette Nagy.