Me and the community

The 11th meeting, within the Keshet Day program, was held on Sunday, November 12, 2017, at 10 am, at the community cafeteria, on “Me and the community” theme.

Thus, more than 40 participants of all ages watched the exhibition “Me and the community” in the reading of Danna Kalman, the secretary of the community; “The Pyramid of Needs” from the Institution’s President, Ionel Schlesinger, listened to the European Union anthem “Ode to Joy” and watched Edward Serotta’s “Auntie Rosie’s Kitchen” about the small Jewish community in Arad. A film made in 1999, when Aunt Rosie, at the beautiful age of 93, coordinated and checked the ritual preparation of food in the community canteen as a majghiah (mosaic ritual supervisor). We have to mention that the film was produced for and broadcast on the American ABC television channel. 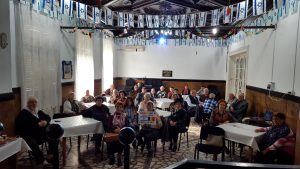 To the delight of the audience, the first part of the event ended with a multimedia program of musical clips carefully selected by the president to give a special atmosphere to the coffee break.

At 12 o’clock, people regrouped for the second part of the program, which debuted with the film created by Raico Cornea on the occasion of 300 years since the first Jew, Isac Elias, was able to legally settle in Arad, until then the Jews lived here without papers.

After some group photos were taken, the participants were invited to watch the phenomenal TED speech “How can we face the future together, without fear” of Rabbi Lord Jonathan Sacks. With over 20 years of experience as Head of the United Hebrew Congregations of the British Commonwealth, Lord Sacks speaks to an audience of specialists in all fields, about the premises of a world in which the differences, whether physical, cultural or religious, would make us stronger both as a nation or group, as well as an individual.

“When you tell a story and your identity is strong, you can say ‘welcome’ to a stranger, but when you stop telling the story, your identity gets weak and you feel threatened by the stranger. And that’s bad. I tell you, Jews have been scattered and dispersed and exiled for 2,000 years. We never lost our identity. Why? Because at least once a year, on the festival of Passover, we told our story and we taught it to our children and we ate the unleavened bread of affliction and tasted the bitter herbs of slavery. So we never lost our identity. I think collectively we’ve got to get back to telling our story, who we are, where we came from, what ideals by which we live. And if that happens, we will become strong enough to welcome the stranger and say, “Come and share our lives, share our stories, share our aspirations and dreams.” That is the us of identity ” says Rabbi Lord Jonathan Sacks, in one of TED’s most widely acclaimed speeches. 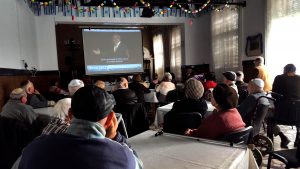 Keshet Day XI ended with the blessing of Shehecheyanu, which is thanksgiving to the Creator for helping us to get to this day. After the program, the community also provided a lunch for the participants.

The event was sponsored by the Jewish Distribution Committee.