Just a week away from the first one, our synagogue hosted the second concert in a series of events organized by the Arad State Philharmonic together with the Jewish Community of Arad (JCA). The fruitful collaboration is due to the return to our city of a daughter of Arad, who left  the city right after high school to study in Vienna, and of the good understanding between the leadership of the philharmonic, represented by its director Doru Orban and the JCA, by President Ionel Schlesinger.

The return home of the organist Henriette Andrea Nagy, because this is about her, has given the opportunity to get the organ from the beautiful neologue synagogue up and running again and to show some of the special cultural values of the city we live in.

“It’s the only mechanical organ in Arad, and it’s an honor for me to use it. I continue to say that I feel privileged and grateful that people trust me so much, because this is a historical organ, a treasure of our city. I am also glad that President Ionel Schlesinger understands that an organ that is not used is self-destructing, and so, singing on it, we can keep it in the best conditions, “says organist Henriette Nagy, visibly excited.

The second concert took place on a Friday, April 27, 2018, at 18 o’clock, when the synagogue was filled with people and music again. This time the works of Georg Muffat, Georg Friedrich Händel, Wolfgang Amadeus Mozart, Theodore Dubois, Felix Alexandre Guilmant, Antonin Dvorak and Jenő Takács were brought to the public.

“We made the repertoire in terms of sound, along with the orchestra to highlight the organ and bring the audience a varied program through both concerts,” adds Henriette Nagy. 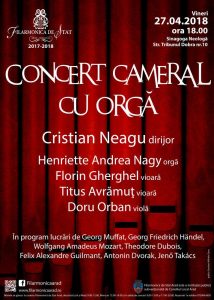 But not only the repertoire impresses  the artists too. From the Facebook posts of the institution, we find out that the conductor, Cristian Neagu, is a graduate of the Music Academy in Cluj and studied with Masters Cristian Mandeal and Constantin Bugeanu, that in 1995 he won the Soros Foundation Award for the best young conductor in our country, that he has conducted all symphonic and opera orchestras and so on and so forth; concerts in Italy, Germany, Hungary, radio and CD recordings, as well as a rich didactic activity.

Although we wrote about Henriette Nagy, we have to mention that she has received the title of Magister Artium in organ, piano and harpsichord. Besides solo concerts on prestigious organs belonging to the most important cathedrals in Vienna and Austria, she has a soul connection with the organ of our synagogue, which she started singing in the last year of high school. Apart from Austria, Henriette Nagy has concerted in Hungary, Italy, Germany, the Netherlands and the UK and has been a distinguished musicologist through her studies and activities.

The Philharmonic Manager Doru Oban also has a rich artistic and didactic activity. He had tours all over Europe, the United States and China. He held the position of interim manager between 2016 and 2018, and from this year he is the manager of the institution.

“It was a great pleasure for me to work with conductor Cristian Neagu and the chamber orchestra because they worked and concerted from their souls,” highlights Henriette Nagy.