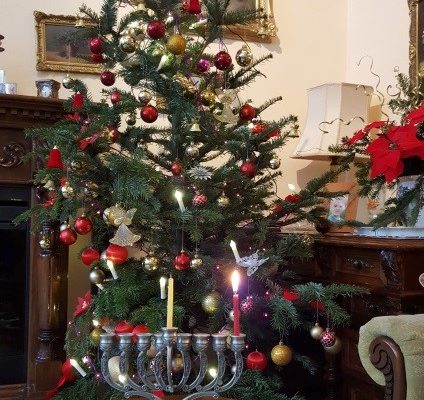 The evening of 2016, December the 24th, although with a different meaning for us than that for our Christian brothers, accounted for every person the beginning of a special holiday: Eve of Hanukkah / Christmas Eve. 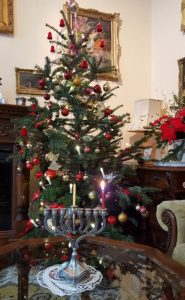 This coincidence has led to an unprecedented demotion of a traditional event. Here is its story:

Many years ago, Professor Mrs. Silvia Demian, back then principal of “Sabin Dragoi” Arts High school from Arad, prepared the choir of high school students a program with songs of Hanukkah. Every year, at Hanukkah, our community has benefited from the extraordinary performance of this choir. At first a habit, it became a tradition, after the retirement of Mrs. Director Demian, the performances continued under the leadership of a former student, member of the choir, now a professor at the same high school (currently “College”) – Monica Tebuie.

As Monica became a mother three years ago and had ceased activity for a period of two years, this beautiful string of events was interrupted. This year, however, Monica has prepared a program for a new generation of students meant to resume the tradition.

Yearly, the celebration of Hanukkah was scheduled in one of the eight days of the feast, the choice being made by several factors (often depending on their availability).

This time we were faced with a challenge due to the coincidence that, in the context of the differences between the Jewish and the Gregorian calendar, are very rare: the first day of Hanukkah fell right on the eve of Christmas! Obviously, the children of the choir could not come on this day and the following days started school holidays, when many of them were leaving the town. It was raised the issue of cancellation of the show, but Monica claimed it would be really sad after her students prepared themselves really well. The solution found was: songs celebrating Hanukkah to take place before Hanukkah! 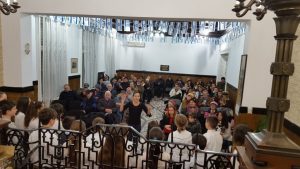 Accordingly, in the afternoon of December the 23rd, before entering the Sabbath, we enjoyed the beautiful songs sung by the wonderful voices of children. Mrs. Professor Monica Tebuie conducted with children choir singing, masterfully accompanied on piano by Professor Dor Niculescu. 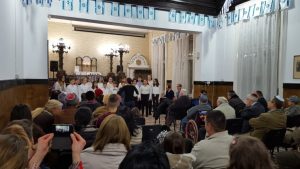 Community members have accompanied this soulful event in their own way: enthusiastically clapping their hands!

This spirit of brotherhood, so inspiredly synthesized in the new #Christnukkah hashtag is characteristic of our beloved city, where we are preparing to mark in the new year of 2017 three hundred years of Jewish life.