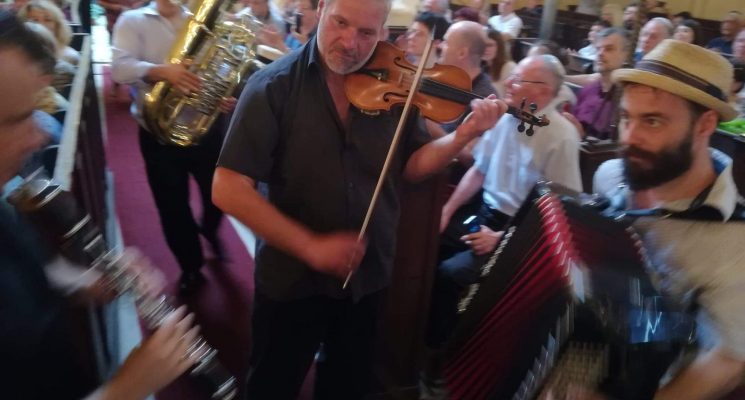 One of the most popular and beloved Klezmer bands in Hungary, popped in on July 7, 2019 in Arad. The “Klein Judith and David Klezmer Band” concert was organized by Andrei Soreanu in collaboration with the Arad Jewish Community. Thus, Sunday afternoon, much earlier than 5 pm, the neologue synagogue in Arad, was already filled, with people from Arad. University professors, doctors, artists, librarians, programmers, journalists, architects, painters, etc., all those who love Jewish music have changed their program to arrive at this concert.

“It seems that although it is Sunday afternoon, although there is a heat-shock, although an orange weather code is announced, although there are other events in Arad, the synagogue still has been filled for this concert” says Ionel Schlesinger the President of the Jewish of Arad to the crowd of over two hundred spectators. 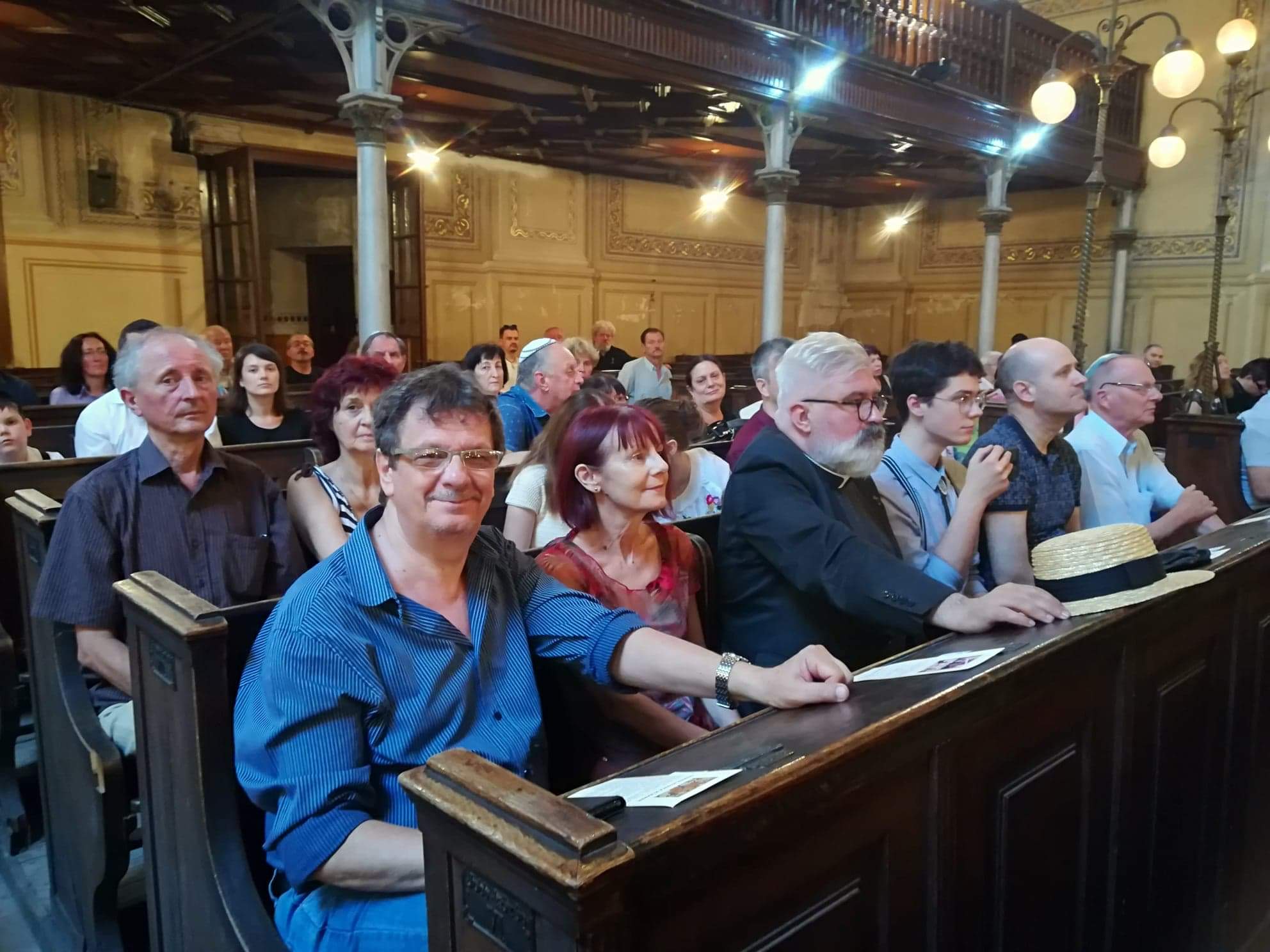 The concert is a special one for our city and its inhabitants, as it celebrates the 185th anniversary of the Neologue rite synagogue in Arad. “We are glad to be able to make the synagogue available to the inhabitants of Arad for cultural events,” stresses out Ionel Schlesinger.

Klezmer music comes from Ashkenazi Jewish culture and combines songs performed at weddings, brit milah and other events in Jewish communities in central and eastern Europe. Provoking very strong emotions, the Jewish musicians, named klezmorim, were called to the events of the ethnic groups where they were influenced by Romanian folklore, Roma music, Hungarian folklore, etc., also receiving a certain Balkan spirit. The combination of all these elements gives us a unique kind of music in the world, which blend the games of the fiddlers in our area with the musical discussions of the Jazz singers, bringing in this artistic melting pot even classical music constructions.

Of course, Klezmer tells, first of all, the story of the Jewish soul, being imbibed by Jewish culture and tradition. When you listen to Klezmer you hear the sadness of thousands of years of a people who have often felt that it has is no place on Earth, that it is not wanted, although it is the people who have as an existential guide the concept of Tikkun Olam, to make a better world for all the inhabitants of the planet. 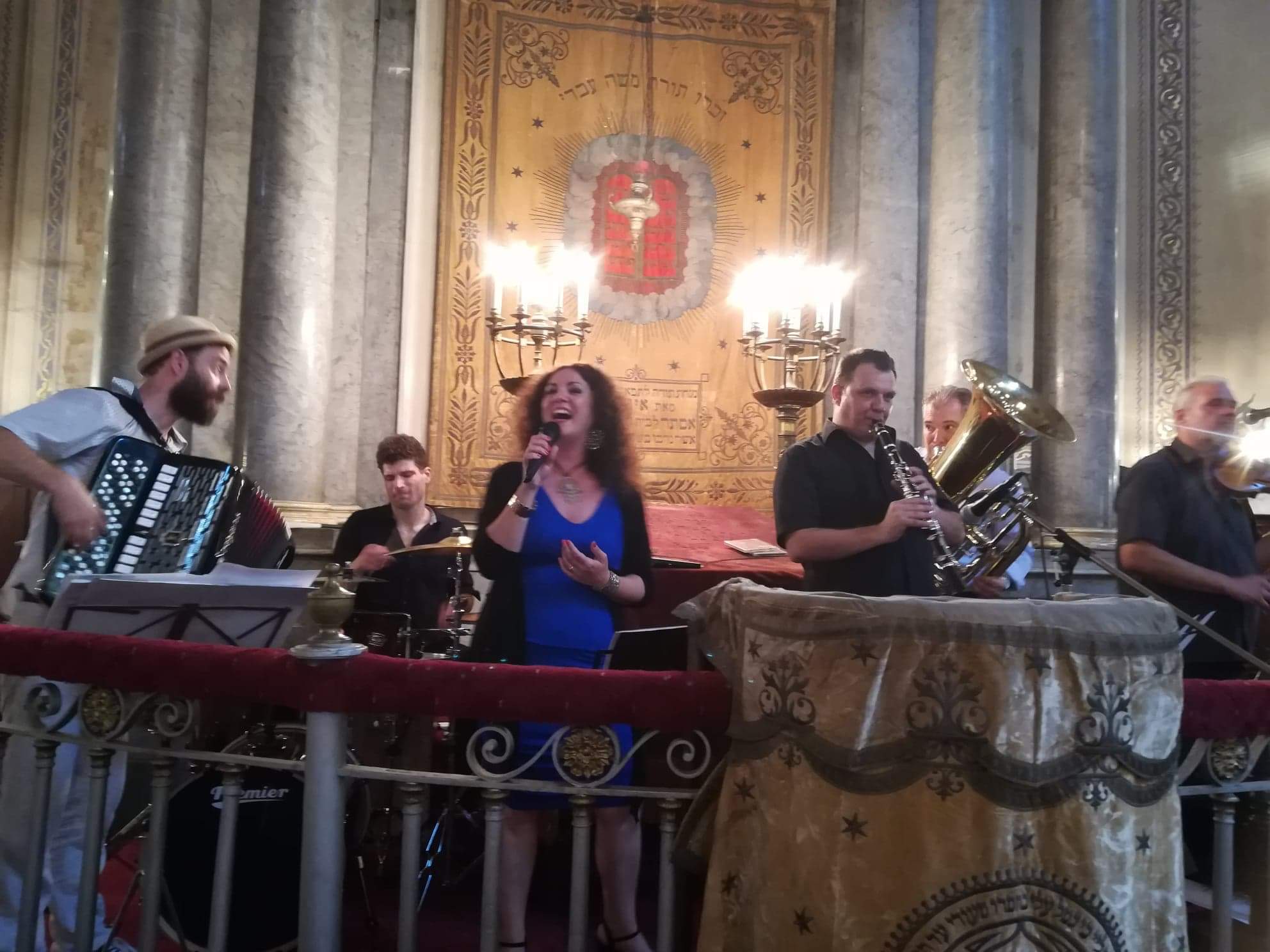 They sang together at several festivals and concerts in Hungary, Switzerland, Austria, Romania, Czech Republic, Slovakia, etc. many of them being televised. In 2000, they received the Emerton Prize for the best studio concert of the year from the Hungarian Radio and Television.

Known to the public of Arad

They were before in Arad, in 2007, when they sang in the Neologue rite synagogue and impressed the audience. The impact was so great that in 2017, when they played in the big hall of “Ioan Slavici” State Theater of Arad they did it with full house. These events were also organized by Andrei Soreanu, together with the Jewish Community of Arad, the 2017 concert being part of a series of cultural-artistic events dedicated to the celebration of 300 years of Jewish life in the city upon Mureș.

Judith Klein along with the David Klezmer Band are the ultimate Klezmer artists. They do on stage (or in the case of this concert, at bimah) a big day show, in which they combine the acting with the play and the music as only the old klezmorim knew how to do. 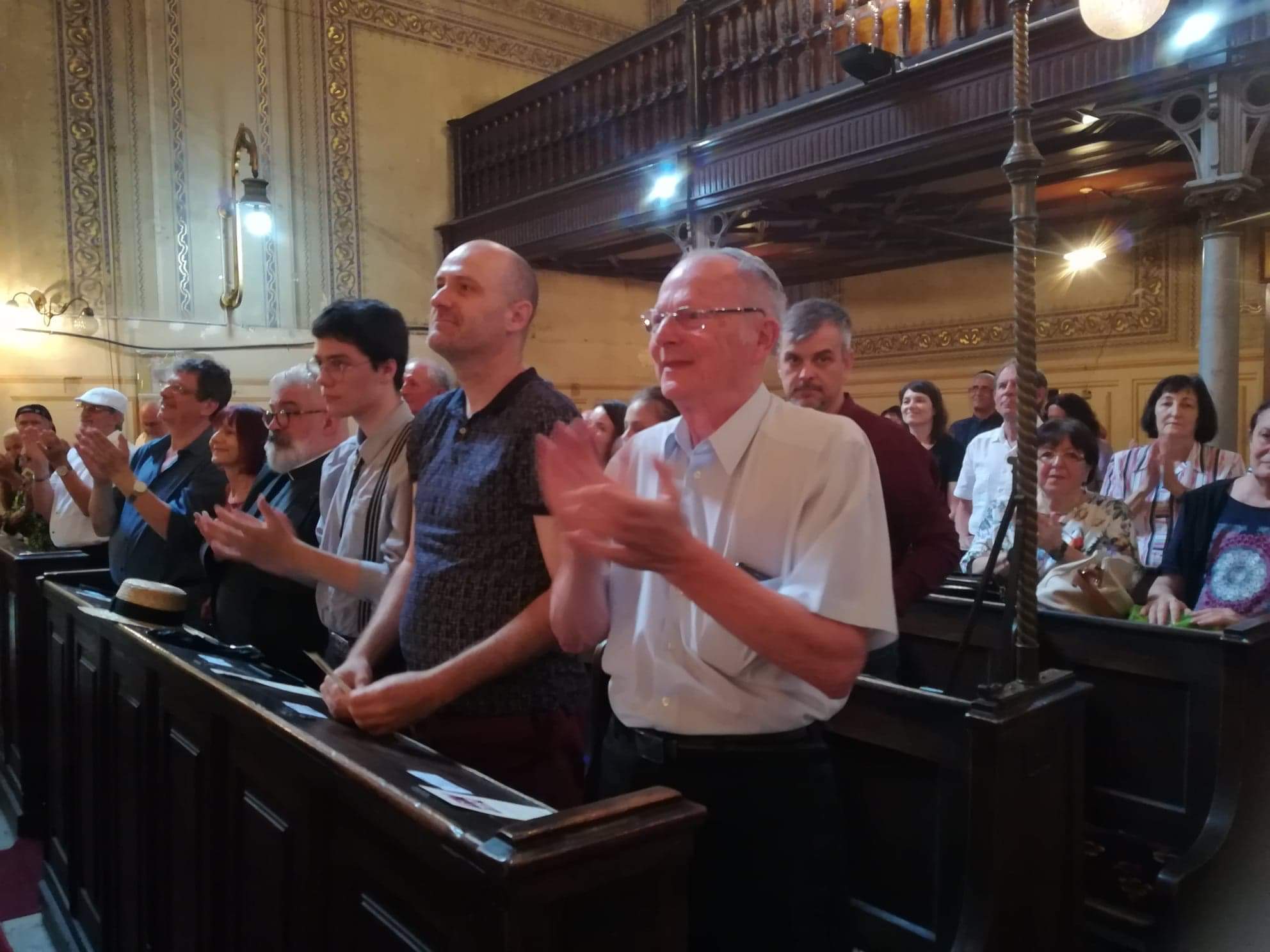 The majestic music event of our klezmorim was sprinkled with many jokes, with situational humor and scenes in which an artist “does not want” to sing, “breaks” the clarinet at the end of the song, throws up the drum sticks or simply “forgets” which song was to be played and from a well known Hava Nagahila turns to the tune “If I was a rich man”, from the “Fiddler on the roof” the band doing a wonderful back and forth from the merge of the two songs.

Many of the songs are presented in the unmistakable style of Judith Klein, who asks the audience “what are most songs about? Do you have any idea? “She also gives us the answer “they are about love”. For me you are the love, for me you are the only one “and everyone starts singing “bei mir bist du shein” that catches up with the one of the famous Barry Sisters.

Usually when you go to a concert you expect to listen to the music and…. that’s about all. In no case are you prepared to learn a foreign language. But as our president says, “these Jews know how to do everything backwards.”

Therefore, Judith Klein asks the audience in the most naive way if they know Yiddish. If they don’t know, bad luck, they have to learn this in concert too. “Now you will know. I teach you”, declares the artist. Already you see those in the room a little bit cringed, some of the audience looks astonished meanwhile others are frowning and looking around, you even get the impression that some of them will rush to the exit. “The lyrics go like this. Pay attention, “continues Judith Klein.”Aiaia iai iaiai,” she begins to sing. The audience is laughing, and some sigh with relief. “Now you know Yiddish or at least you know how to wail in Yiddish.” The whole synagogue is caught in the game that continues by making them sing alternatively, gentlemen and ladies. “Pay attention to me. Now only very beautiful, lonely and rich gentlemen sing. Let’s see who you are. ” and the room bursts into laughter as they do at every other joke made by the famous Klezmer artist. 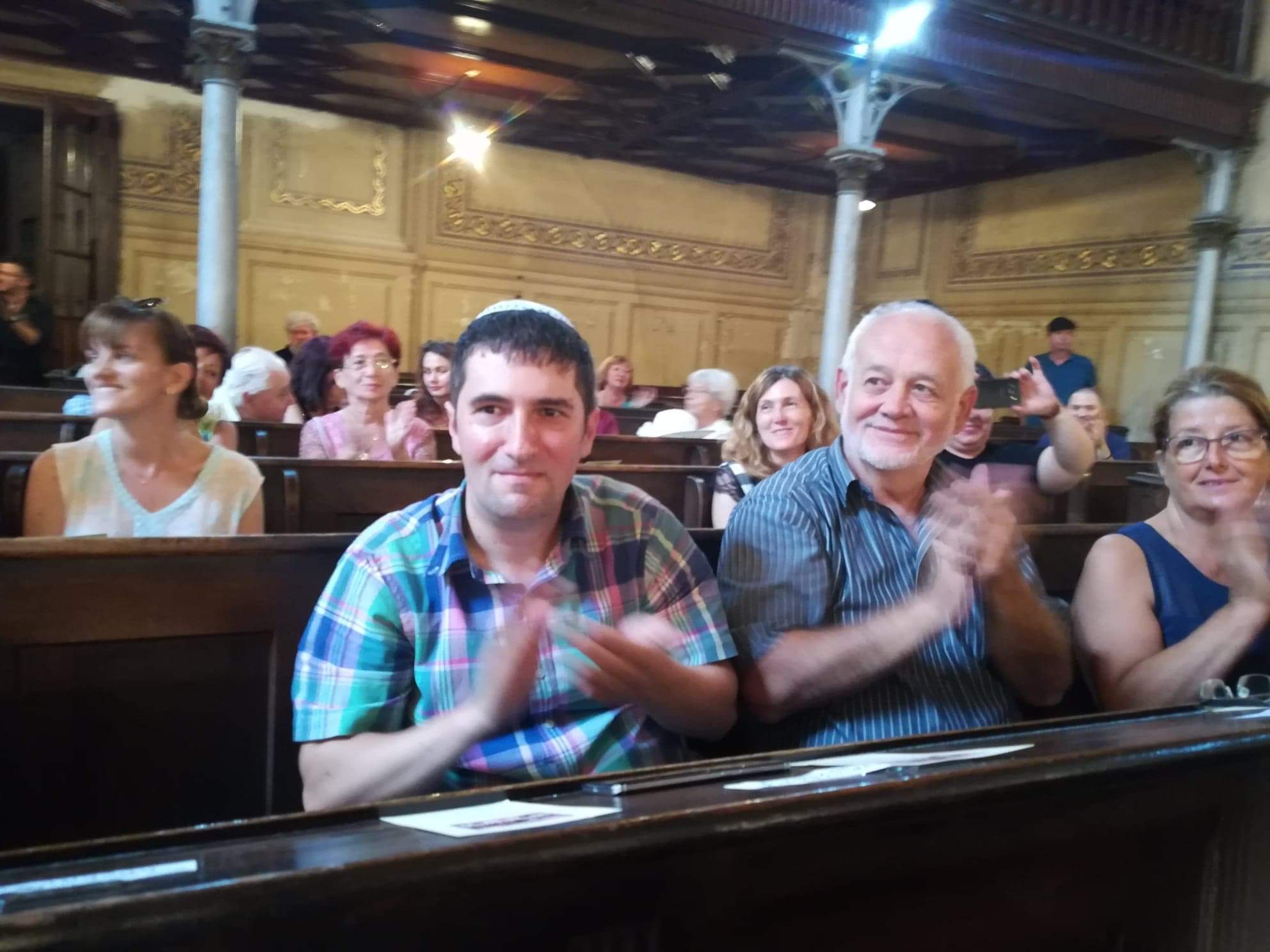 One of the songs was completed by a long, even very long duration, musical corona, Judith Klein demonstrating, again, a great technique and very strong lungs. Masters of the scene, her colleagues, pretended to be slightly outraged or bored with her performance, of course, the audience a cherished every moment. Moreover, the cheers of applause showed the peak and the joy brought to the Arad’s public.

There were times when the singers went down in public, shared the microphone with the spectators, making everyone present to be an active part of the show. What does it mean to be an artist? To bring emotions. Our klezmorim brought to the strongest emotions of astonishment, soul exaltation and joy to the Arad’s audience. We thank them from our hearts.

”We remember and remind”