The Jewish Community of Arad celebrated on the end of the week, on 8-9 June 2019 the Shavuot, that is, receiving the Torah on Mount Sinai. One of the most important celebrations of the Jews has at its center the Torah, which Christians call the Old Testament. According to the Jewish religion, all Jews of all time, whether they were born Jews or converted to Judaism, participated in this event. Thus, we realize the grandeur of the event by which the Divine gives the holy book to the Jewish people.

The members of the Jewish Community of Arad gathered together from small to big, in numbers that honor a community of the size we have in our city. Families have come even with small children as 3 or 4 years olds, the former canteen’s hall gathering members of the community of all ages. Of course the little ones hardly have resisted at the event that lasted more than three hours.

The Shavuot is counted alongside Pesach and Sukkot among the “shalosh regalim”, the three pilgrimage celebrations of Judaism, when the Jews used to go to the Temple in Jerusalem. After the destruction of the second temple, in the year 70 our era, the Jews were no longer required to go on pilgrimages. This derogation is in force until the construction of the third temple and the coming of the Meshiah, who will bring Olam Haba, “the world to come.” 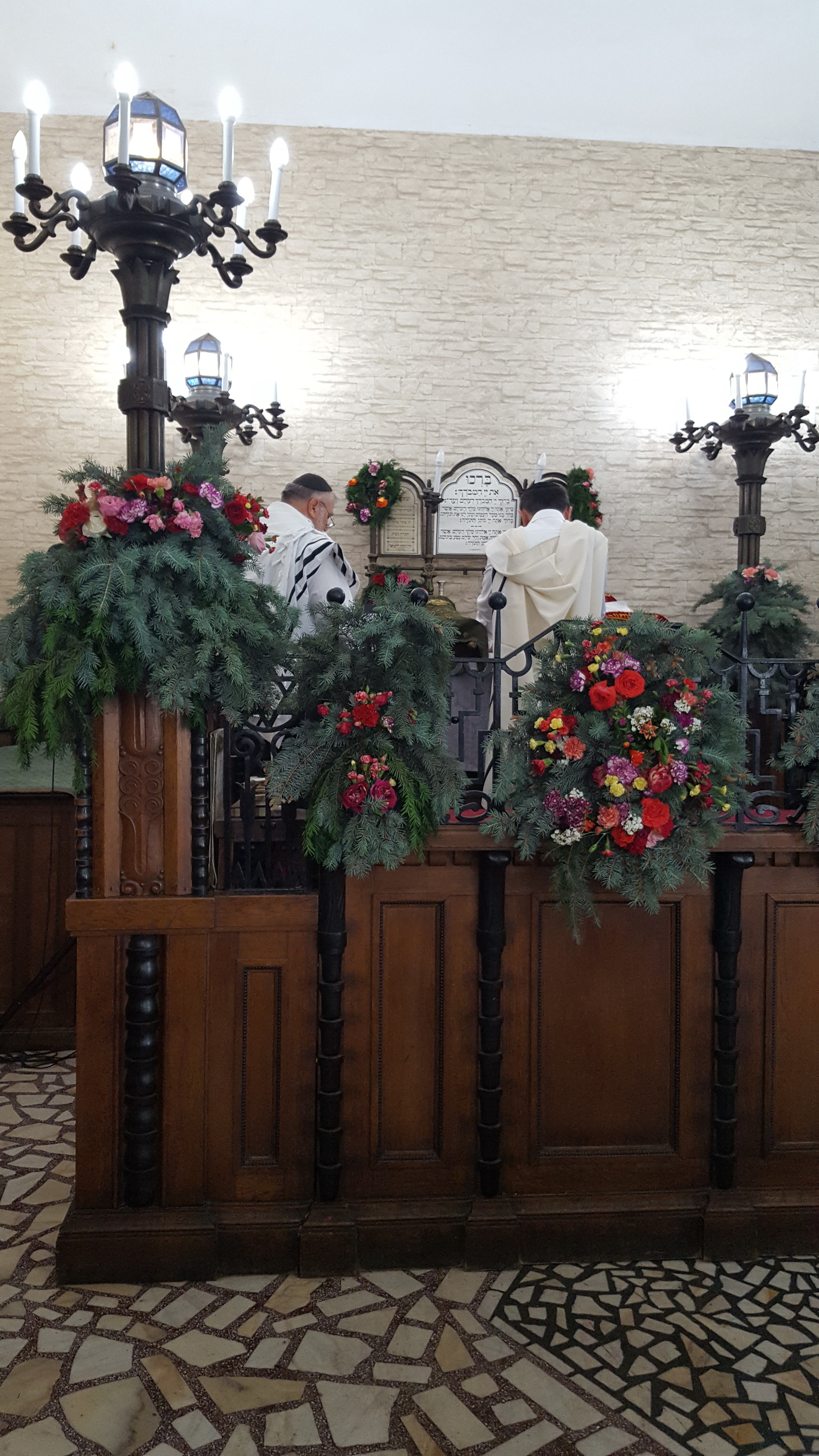 The essence of Judaism is related to the three temples in Jerusalem, the two destroyed and the one to be built, because during the pilgrimage to the temple in the holy city the Jew presented himself to the Divine as instructed the day after the reception of the Torah. The passage describing the pilgrimages is also read on Shavuot and is in Devarim (Deuteronomy, in English). Also, the ten commandments are read which, if respected, would be the basis of the world to come, Olam Haba, with no crime, wars or other acts of violence.

As it is customary for celebrations, the Jews of Arad have brought out two Torah scrolls to which Boris Mor, the cult official, called the Halachi Jews to read brief passages. The scrolls were carried by Ionel Schlesinger, the president of the Jewish Community of Arad and Silard Pusztai among the participants so that everyone could touch them.

An important part of the Shavuot ritual is when Izkor is made, on the second day of the celebration. Jews are not allowed to go to cemeteries in the first week after burial, on Shabbat days, or religious holidays, but Izkor (memorial) is made four times a year. Izkor is a memorial service for first-degree relatives. It is held on Pesach, Shavuot, Shemini Atzeret and Yom Kippur. In Ashkenazi communities in Romania, those who have both parents alive are asked to leave the room during this memorial process, often being told that they are not allowed to hear this prayer. But those who remain are recalling, among tears, the dear person they have lost. “Iosef ben Efraim” whispers, between sighs, someone who has recently lost her father. May his memory be blessed, זיכרונו לברכה. After Izkor ended, those who have waited outside can enter. The atmosphere is a little heavier, sad. Slowly things seem to resume their normal course, but one can read the pain of those who have a recent wound in the soul.

Songs, prayers, whisperings, Kadish, all said in a homelike, familylike, and holidaylike atmosphere created by this small community whose members are mostly elderly.

To the event’s logistics contributed Ani (Ana Ioniţă), who, among other things, decorated the Bimah with green plants and flowers and Danna Kalman, the community secretary, who takes care of the dissemination of the information about our events. The cheese cakes along with all the dairy foods are specific to the Shavuot feast.

Aunt Ani together with the community’s president and several other members have dealt with the distribution of cheese cakes, halach, mineral water, wine and coffee, each participant being served with something. During this time, Boris Mor held a speech about the event of receiving the Torah by the Jewish people, its importance and the duty to hold this celebration, also speaking of the Shavuot traditions. There have been discussions between members of the community sprinkled with jokes and reports about recent events and all sorts of stories.

PS: in memory of the one who was Ioan Szegő