People from Arad, victims of the European Holocaust

Two days before the international commemoration of the Holocaust victims, historians and Arad personalities gathered for a few hours remembrance  at a round table with the theme “People from Arad – victims of the European Holocaust”.

The event was organized by the Jewish Studies Center “Academician Nicolae Cajal” of the “Vasile Goldiş”  Western University of Arad, in collaboration with the “A. D. Xenopol” library and the Jewish Community of Arad. The meeting was held at the UVVG University and Students House on January 25, 2019.

Prof. univ. Marius Grec, the director of the Jewish Studies Center, began the debate, noting that the Jews who lived at that time in Arad were not deported to concentration camps but suffered greatly because of racial laws, confiscation of wealth, social isolation, rapid impoverishment due to these phenomena, or of forced labor camps

In our area, Jews were kicked out of work, Jewish pupils were kicked out of school; in the county, people of Jewish origin had to leave their homes and were displaced to Arad. Some of them found shelter at relatives and friends, Jews and non-Jews, others were helped by the Jewish community. On the other hand, there were Jews from Arad that events had caught in other parts of the country or Europe wherefrom they were deported to concentration camps. 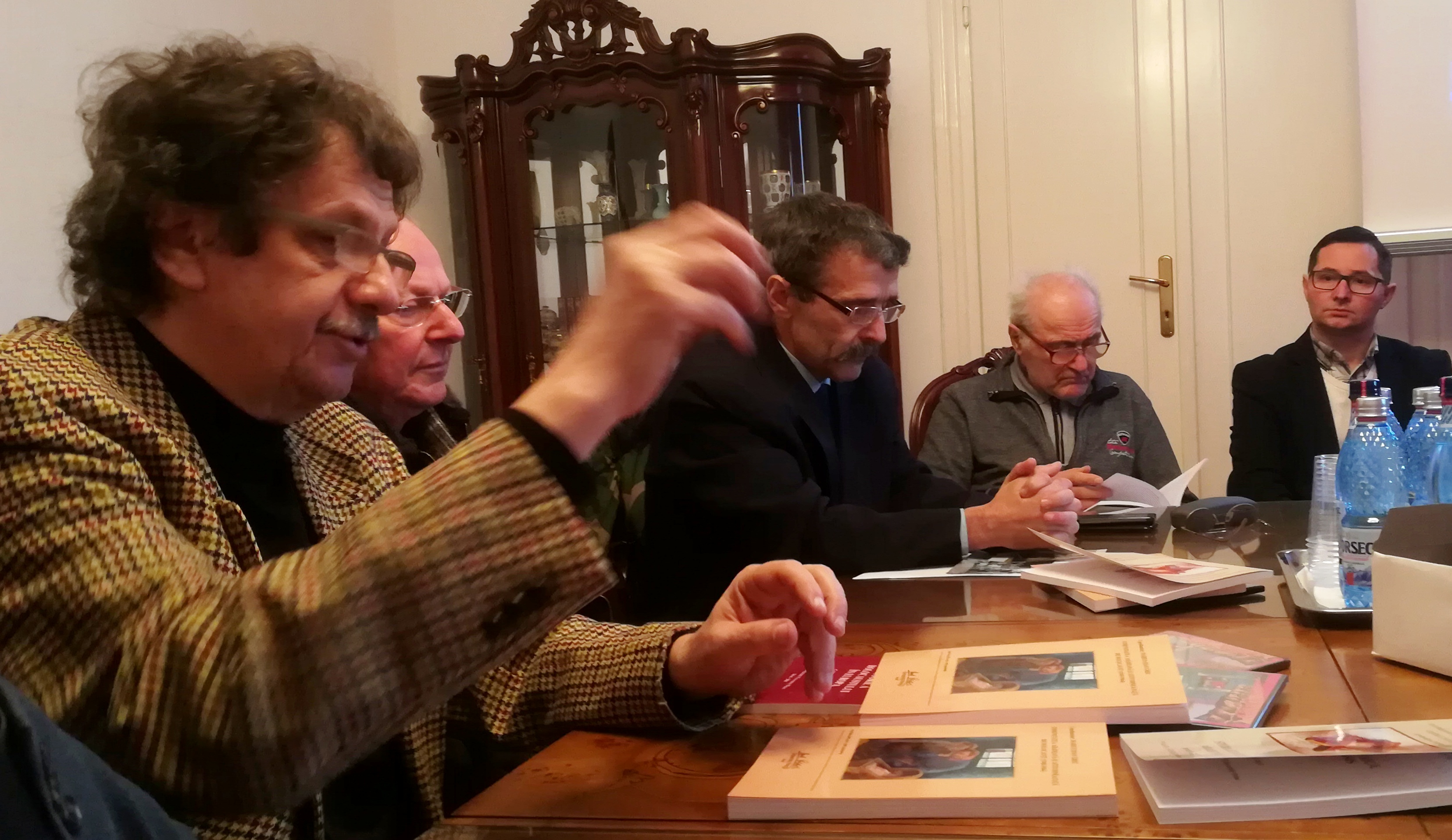 The good part, the bad part

When it comes to the Holocaust, and beyond, there are people who, for various reasons, want to diminish the significance of the events. Whether they totally deny  it, or they say “they have died only that much,” or they do not want to take into account the suffering of a population that has contributed to building society no matter  in which country it was. To illustrate how an evil event can be described from a many perspectives, Ionel Schlesinger, president of the Jewish Community of Arad, said a joke, for as he says, “these Jews are joking even when they have their worse times”. So, he tells how elder Gheorghe fell from the roof. The good part was that he caught the gutter, the bad part was that the gutter broke, the good part that there was a haystack, the bad part was… and so on, a story that can be extended a great deal until we find out that our man has suffered a lot. By extrapolation, we see that the Jews who were in Arad were not gassed, but all the mockery, hatred or indifference, all the laws that led them to the brink of human existence became  a nightmare for them, that otherwise would have been hard to imagine but was even harder to live.

President, Ionel Schlesinger remembers how his family, hidden in the cellar of the house, was rescued by the fact that the portrayer, asked by the Hungarian gendarmes, csendőrők, if they were Jewish in the house, replied that no. Although she was of Hungarian origin, she chose to be, first of all, human. Unfortunately, there are fewer people who can testify to the events of that time. The president’s thoughts have gone to radical Islam, attention, not Islamic religion, which jeopardizes Judeo-Christian civilization and beyond. An example was the situation of Israel, which has been sanctioned by the United Nations 84 times in the last two years, while states that practice mass executions have not been sanctioned.

Refugees from Sighet, arrived in Arad

Doctor Alexandru Dumnici, the author of “The History of Jewish Medicine in Arad”, mentions some aspects of the situation of Jewish doctors in our city. It is known that due to racial laws, Jewish doctors could not have non-Jewish patients, nor were Jewish patients allowed to be consulted by other ethnic doctors. Dr. Alexandru Dumnici wanted to mention the deprecating name “jizi” used in the documents he researched. Originally from Sighetul Marmatiei, Dr. Dumnici spoke about 40 Jewish refugees from Sighet who came to Arad to find shelter at their relatives. Thus, he says, the Holocaust has made its mark on Jews all over the country. Silence fell for a moment over the round table after some of the participants wondered how it was possible. Those who visited the museum in Auschwitz tried to understand how a cultured people who gave mankind so many personalities, such as the German people, could generate such horrors.

“The Holocaust did not make it cars but the words”

Between Holocaust and Shoah

Starting from the definition of antisemitism, other terms have been analyzed. In the opinion of the historians at this meeting, the word Holocaust, which means completely burned, from the Greek Holos, “whole” and kaustos, “burned” does not adequately describe the suffering of the time, although it is the most known. A more appropriate term is the Jewish word Shoah, which means “calamity”, “great misfortune” because not all who suffered were burned, whether Jews or non-Jews. A salutary intervention was given by Adelina Stoenescu, a curator at the Arad’s Museum Complex and a brilliant teacher. She spoke about the project she coordinated “In the Shadow of the Shoah”, which took place between 2008-2010. Thanks to it, Arad pupils and teachers could study the twentieth century Jewish life in  Arad. Thus, the students participated in the activities of the Jewish Community of Arad, met with members of the community and listened to the testimonies of the Holocaust survivors. The project with high impact on high school students is detailed on the Romanian page of the Yad Vashem Museum in  Israel.

Ioan Boia Stelean, University Lecturer, who came to the debate although on January 25th celebrated his birthday, talked about possible new collaborations with the AJC. He thinks there are many things that have not been written about the history of theArad Jews, and it would be a shame to lose them.

Short interventions had Ioan Cuzman, university professor; Horia Truță, the owner of the Arad Water Tower and drd. Radu Hord, who studies the history of the Jewish community in the Arad area. Among the participants we can mention Maria Pantea, historian at UVVG; Deputy Glad Varga and Conf. Sorin Bulboacă.