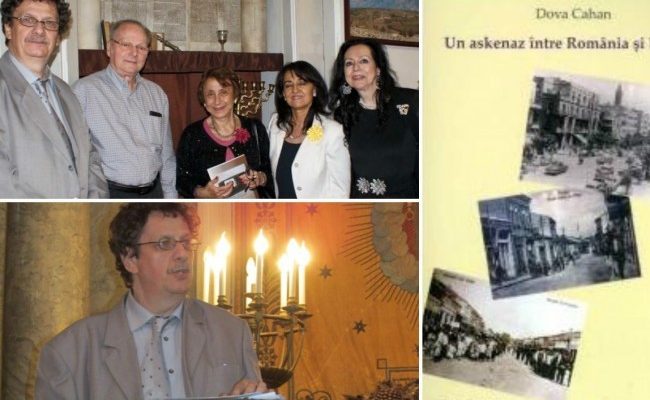 Thursday, May the 26th, 2016, at the Neologue Synagogue from Arad was held the release of the book “An Ashkenazi between Romania and Eritrea” by Dova Cahan.

The initiator and organizer of this event from Arad, was Dana Sas – President of Business Women Club Arad, who has directed the moment. Welcoming host – The Jewish community of Arad, through its community chairman, Eng. Ionel Schlesinger and volume presentation was made by the university professor dr. Marius Ioan Grec, Director of the Center for Jewish Studies “Academician Nicolae Cajal” of UVVG from Arad.

The Ashkenazi Jews are a population that comes from western and central Europe, especially in Germanic countries, where they arrived after the expulsion from Judea by the Roman Empire troops. Since the early centuries of the first millennium AD and especially in the Middle Ages the Ashkenazi have migrated to Eastern Europe. Their religious customs and rituals have certain differences from the Sephardic Jews. Since many centuries, Ashkenazi Jews have been expressing themselves in three languages: the language of the official population in which they lived; Yiddish language, an idiomatic Germanic language part of the Hochdeutsch group, used in everyday life in Central and Eastern Europe (unlike the Sephardic Jews who spoke “Ladino”, an old Spanish language, used in the XIV and XV centuries, and in some cases, Portuguese) and Hebrew (and Aramaic), “sacred language” used especially in worship, in discussions amongst scholars or communicating with the Jews in remote communities.

Eritrea (Eritrea State official) is located in the north-east of Africa, bordered by Sudan in the north and northwest, Ethiopia to the south and west, Djibouti in the southeast and the Red Sea to the east. Italian and British former colony, Eritrea was annexed by Ethiopia in 1952, which led to a long war of liberation that culminated in Eritrean independence in 1993. Eritrea’s capital and largest city is Asmara.

Dova Cahan was born in Bucharest on June 17, 1947 and dedicates this book to the memory of her father Herscu Saima Cahan (1912-1974), emblematic figure of the militant Zionist philanthropist in Romania who was forced to abandon Romania immediately after the installation of communism and take refuge with his family in Eritrea, Asmara, where he remained until his death.

The author relives and reconstructs this route carefully and sensitively, with passion, trying to raise a monument to his fathers’ boundless love.

From the outset, the author exposes in resolute and simple words the core of his approach: sketching – a multiple perspective – the personality of her father Herscu Saima Cahan “my father was a Zionist, a philanthropist, a great man, a hero, a myth…”

The preface is written by Giovanni Marco Cavallarin (first edition of volume appeared in 2010, in Italian), who was busy studying community Hebrew from Eritrea and was conquered by Dova Cahan’s spiritual light and direct approach, who persuaded him to accept to write about the volume, about Herscu Saima Cahan and not least about Dova Cahan “… Dova Cahan is not a historiographer and some interpretations of historical facts may produce reactions amongst other writers. Her native tongue is Yiddish… This book, however, wanted to write in Italian, because it was the language of the Eritrean youth and memories of his father.”

In his presentation, Professor Marius Grec (in the picture) began by evoking the particular place where the event occurs: Synagogue of Arad, raised by Rabbi Aaron Chorin, at whose birth we celebrate – this year – 250 years. A book about one of the greatest Zionist presented in a place of Jewish worship, which symbolizes a new openness to God through faith bringing closer the faithful. What did it mean to Herscu Saima Cahan, Zionism? It was not just a reunion of Jews in the ancestor’s territory, it was – equally – a return to faith, to Judaism.

Professor Marius Grec showed the structure of the volume, a structure which aims the destiny of the hero, but also his family’s destiny: 1912-1948 – the period in Romania; 1948-1974 – Eritrean period and the last part – the period after the death of Herscu Saima Cahan. The family was reunited in Israel, without the one who campaigned all his life to make this possible. He passed into eternity, far too early at an age that would have allowed him to implement many of the projects that he thought. Only his body will be transported from Asmara family “home” in the land of dreams.

Dova Cahan stresses at a time… “Because he had no son, father kept repeating that when he dies, there shall be no one to read Kaddish’s prayer for the dead.” Afterwards, words of great solemnity were spoken… “May His great name be glorified.” We can say that he is spiritually present in the volume, a volume of a devoted daughter, dedicated to his beloved father, a man among men, a father among fathers.

The author, Dova Cahan, recalled some of the events that marked her childhood and youth, incidents connected – most often – to her father Herscu Saima Cahan, compared – most of the times – to her mother, a gentle woman, delicate and totally dedicated to the family. She also explained to those present the events that led to the writing of volume, the encounter with historian Marco Giovanni Cavallarin, the author of the Preface and one of those who helped in compiling the writing.

The emotional moments that took place in the Neologue Synagogue of Arad, the presentation of the volume done by Professor Marius Grec and the memories of Dove Cahan, were completed with a reading of the two editions of the volume – edition in Italian and the Romanian version – and artistic moments supported by students from the National College “Moise Nicoara” and School of Art “Sabin Dragoi”, artistic moments that have delighted the audience, thus ending a successful event. Finally, Ms. Dana Sas, president of the Club of Business Women in Arad, thanked everyone who contributed to the success of the event.